Luther Dickinson and The Sons of Mudboy: Onward and Upward 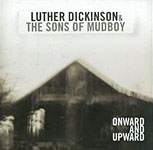 Luther Dickinson, a founding member of The North Mississippi Allstars and a guitarist recently recruited into The Black Crowes, is only one member of The Sons of Mudboy, an impromptu gathering of musicians offering a posthumous tribute to Dickinson's father, Jim. The group's name constitutes a further homage to the elder Dickinson, who fronted a band called Mudboy and the Neutrons in the 1970s. Jim Dickinson's solo recording career, rooted in Sun Studios session work in the 1960s, was in ...