On the new episode of The Jazz Session, Jason Crane interviews French guitarist Francis Jacob. Jacob's career has taken him around the world: France, Switzerland, Boston, Brazil, Paris and now New York. Along the way, he's picked up a gift for improvisation and a taste for West African music. On his new CD, Side By Side (2006), he combines his many influences and creates two albums in one -- the same tunes, played by two wonderfully different bands.Listen ... 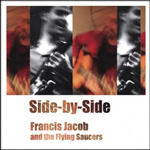 Call Francis Jacob a musical globetrotter. The guitarist was raised in Geneva, Switzerland, studied at Berklee in Boston, moved to Brazil in 1989 to study music there, then relocated to New York in 1991. And with Side-By-Side, he's crafted a two-sided world fusion sound driven by African rhythms.The set relies on one of the more interesting concepts I've heard: seven original tunes (plus one extra, with no match), each played in both an electric and acoustic versions, wisely ...