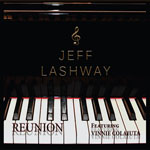 Throughout the decades, the bands of trumpet legend Maynard Ferguson were, by very nature, heavily brass and ensemble section oriented. Occasionally, Ferguson's pianists were given the opportunity to shine, launching into extended solo tune introductions or brief solos. Some of those pianists were (or would become) stars or leaders in their own right. They included Mike Abene, Allan Zavod, Pete Jackson, Jaki Byard, Bob James, Christian Jacob and others. Even Chick Corea did a short stint before returning to forever. ...