Concha Buika: I Feel the Warmer Side of Life When I Sing

When Spanish singer Concha Buika sings, songs uncoil from her like smoke. Whether she sings jazz classics, Jacquel Brel, Chavella Vargas songs or her own songs, there is a warm intimacy in her husky and seductive voice that easily envelops listeners. 15 years after her debut, Mestizuo, a record with jazz classics she continues her musical journey of exploring beyond the ordinary with records that are imbued with diversity from flamenco, soul, jazz and pop music to Afro-beat, Cuban music, ...

Concha BuikaBarcelona Jazz FestivalBarcelona, SpainNovember 5, 2009 From the opening notes of Oro santo-Mamita to the final dramatic pauses in the familiar Ojos verdes: 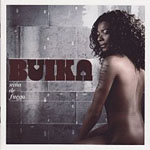 Buika is adding an innovative voice to the ever-evolving music of flamenco, one she describes as a blend of African, American, and Andalucían.

Javier Limón, of Lagrimas Negras (RCA Victor, 2004) fame, first signed and produced Buika for Mi Niña Lola (Warner Music Latina, 2007). It went on to triumph with the song and production of the year in Spanish music three years ago, earning her international recognition and accolades. The title song, now a trademark tune for her, has ...