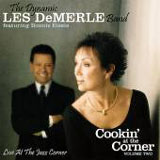 On November 11 and 12, 2005 drummer Les DeMerle and his band recorded a two-session live performance at The Jazz Corner in Hilton Head, South Carolina, producing his fourth and fifth recordings, Cookin' at the Corner, Volume One and Volume Two for Origin Records. Recording a total of thirty songs, Volume Two represents the second half of this project.

As with the first session, this follow-up release features vocalist and wife, Bonnie Eisele, with whom DeMerle has recorded ...

The Les DeMerle Band: Cookin' At The Corner, Volume One

A veteran first-call musician and leader of many bands who has also shared the stage with the likes of Frank Sinatra, Sammy Davis Jr. and Mel Torme, power drummer Les DeMerle's fourth album on the Origin label, Cookin' at the Corner, Volume One, was recorded live at the Jazz Corner in Hilton Head, South Carolina in 2005. DeMerle and crew deliver a swinging performance of jazz vocals and instrumentals music, playing thirteen classic standards packaged in between two original tunes. A lot of us jazz fans cut our listening teeth on Blue Note records by Horace Silver, Art Blakey, Lee Morgan and more. The Dynamic Les DeMerle Band's Hittin' the Blue Notes, Vol. 2 celebrates that classic sound with a set of swinging, hard-driving hard bop tunes.Les DeMerle sat in the drummer's chair in the Harry James Orchestra for twelve years, and he brings to this project an exuberant and swinging propulsion, a crisp and brightly optimistic rhythmic ...

The Les DeMerle Band: You're The Bop: A Jazz Portrait of Cole Porter

A small band with a very large band sound.

Skip right to the last track, “Love for Sale". This is a drum-voice duet between DeMerle and Eisele. It is stunning. Eisele's time is as perfect her empathy with the drummer DeMerle. This reading is as effective as the same vehicle used by Mary Pearson on her Arkadia release You and I, where she duets with the drums. Voice and drums'drums and voice, this is what this disc is ...