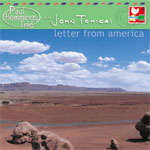 The Paul Hemmings Trio with saxophonist John Tchicai mixes some styles around on Letter From American, and still comes up with a cohesive set of sounds.“Under a New Mexico Sky" opens the disc with a sludgy rhythm behind John Tchicai's raw, loud saxophone. It sounds like Led Zeppelin, circa 1969, especially when guitarist Hemmings roars in like an amplified band saw. Tchicai is normally tagged as an avant-garde guy who played on an early avant blast--John ...

The Paul Hemmings Trio with John Tchicai: Letter From America

When guitarist Paul Hemmings says that he views jazz through a wide angle lens, he is not making an idle boast. He shows just how adventurous a composer he is on this recording, his third as leader. It goes past his two previous recordings--In and Out (Leading Tone, 2003), which had a strong mainstream approach, and Sgt. Pepper's Lonely Hearts Club Band (Live!) (Leading Tone, 2006), which was a reworking of The Beatles' album recorded in concert.

It is often necessary to do a cost-benefit analysis when including a “name" on a jazz recording. Will the added recognition be offset either by a lackluster performance that seems purely mercenary or a star shining that much brighter than those around them, creating unevenness? One imagines that guitarist Paul Hemmings has made this analysis several times already over the course of his short career. His first album featured saxophonist Eric Alexander; his second was a frankly ...