Quasi-historians suggest that the story, in which Christian X, King of Denmark dictated that all Danes, including himself, would wear the Star of David as a symbol of solidarity with his Jewish subjects, if the Nazis forced the Danish Jews to do so, is apocryphal. The profound nature of the King's support for his Jewish subjects and his fierce declaration of Danish nationalism amid the then-rise of Nazism is at the heart of the celebration of this suite. Indeed, pianist/composer ...

Making a special social statement with his music, Danish-born pianist Soren Moller honors the memory of Danish King Christian X who, during World War II, protected his country's Jews from discrimination and deportation by the Nazis. The effort to protect and unite fellow countrymen served as the inspiration for the compositions on Christian X Variations. These are five powerful compositions, arranged for both a conventional quartet and a wind quintet, with Moller blending elements of jazz and classical ...

While Danish-born pianist Soren Moller and American saxophonist Dick Oatts--of Thad Jones-Mel Lewis Jazz orchestra fame--have had an ongoing partnership on record, the seeds of this union have finally reached full bloom with Christian X Variations. The music on this recording, written to honor the Danish King who made significant efforts to protect Jews from deportation and discrimination during World War II, is easily the most ambitious and powerful that Moller has ever created. Whether veering into ... 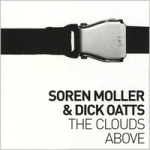 The Clouds Above is the continuation of a duet project that pianist Soren Moller and saxophonist Dick Oatts began with Storytelling (Audial, 2005). Like that release, The Clouds Above brags all originals save for one classical adaptation, in this case Sergei Prokofiev's Balcony Scene from his 1935 ballet, Romeo and Juliet, here captured lyrically by Moller's most restrained pianism. Oatts plays alto on the piece, weaving in and out of the scaffolding erected by Moller. The effect is one of ...