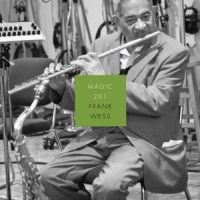 The cover of the late Frank Wess' final album, Magic 201, closely resembles that of its predecessor, Magic 101--so much so that a reviewer who didn't look closely enough might assume he'd been sent a second copy of the earlier album by mistake. (Oops!) Wess recorded Magic 201 in September 2011, two months after Magic 101 and less than four months before his ninetieth birthday. The format is roughly the same--emphasis on ballads and medium-tempo blues, Wess relying heavily on ...

IPO Records has become the jazz destination for seasoned jazz veterans. Saxophonist James Moody (1925--2010) recorded his last two releases for the label: Moody 4A (2009) and Moody 4B (2010). Hard on Moody's heels is saxophonist Frank Wess (1922- -2013) who followed his Magic 101 (2013) with the predictable titled Magic 201. Pianist Kenny Barron and drummer Winard Harper hold over from the previous recording, augmented by bassist Rufus Reid and guitarist Russell Malone. Six standards and ...

Despite a career that spanned more than half of a century, Frank Wess was not a household name. The flautist/saxophonist spent the 1950s and 60s playing with some of the best known big bands in the U.S. including those of Billy Eckstine, Count Basie and Clark Terry. During that period he was primarily recognized as a flute virtuoso though he played both alto and tenor saxophone at that time as well. Wess shifted his attention more toward the saxophone later ...

What a wonderful coda on an incredible life and career. Saxophonist/Flautist Frank Wess' final recordings--the critically acclaimed Magic 101 (IPO, 2013) and this follow-up, recorded two months after that album--speak to his brilliance and clarity as a melody maker and improviser. His wisdom and elegance come through in every note on both recordings. The titles of both albums rightly mark them as companion pieces and close relatives, so here's how they stack up side-by-side: Both albums favor ...

Saxophonist Frank Wess was born in 1922. He played in Billy Ecstine's orchestra, after World War II interrupted his burgeoning career, and he played in Count Basie's band from 1953 to 1964. With those early experiences on his resume, the fact that he was a traditionalist in the mode of saxophonists Ben Webster, of Duke Ellington Orchestra fame, and Coleman Hawkins and Lester Young should come as no surprise. Following up his Magic 101 (IPO Recording, 2013), Wess, ...

In 2007, saxophonist and flutist Frank Wess was named NEA Jazz Master, and Magic 101 amply demonstrates why. This mellow session covers six standards and a Wess original, with a candid and unadorned style that is nevertheless powerful in its apparent simplicity.Like a wise raconteur, the 89 year-old (at the time of the recording) icon embellishes the melodies with wit and erudition. His cool, big-toned tenor weaves flowing lines in muted color around the rhythm section's languid beats ...

Most musicians can't escape the ravages of time, but a select few seem to have taken a sip from the musical fountain of youth. The late Hank Jones, for example, played with brilliance and class until the day he died at the age of 91, and octogenarian drummer Roy Haynes continues to snap and crackle in all the right places, demonstrating unmatched originality and agility as he approaches the big nine-o. Saxophonist/flautist Frank Wess is another such figure. Wess, who ...