Gerald Veasley: At the Jazz Base! 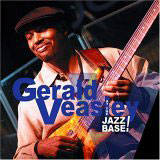 Make it funky! That's the first impression you get on “Shango, the opening track of Gerald Veasley's new recording, which sets the tone for an enjoyable hour of music that's a little bit smooth, a little bit funk, and a lot of groove. With a supporting cast that includes saxophonist Chris Farr, drummer Eric Greene, and conguero/percussionist Pablo Batista, Veasley is clearly in the zone.All but one of the ten songs on At the Jazz Base! are Veasley ...

A mixture of smooth and hip hop issued under the name of jazz, Gerald Veasley's album for the Heads Up label is a combination of pablum and sedative. If your lucky, it will put you to sleep before it drives you crazy with boredom, because each track is virtually indistinguishable from every other track. No dynamics here and each tune is performed in that seamless, stream of consciousness manner that seems to characterize this musical style. In sum, it doesn't ...