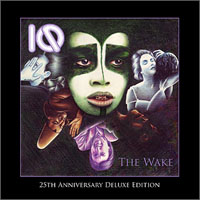 IQThe Wake: Deluxe EditionGiant Electric Pea2010 In the wake of punk/new wave's emergence in the mid-1970s, progressive rock underwent massive restructuring and a shift from mainstream popularity to niche status. By the latter half of the decade, Emerson, Lake & Palmer had already begun to implode in a flurry of bloated egos. Yes began a revolving-door personnel policy that would continue into the 21st century, resulting in minor classics like Drama (Atlantic, ...