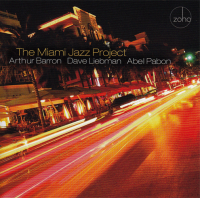 Always on the lookout for outstanding players to join him, NEA Jazz Master saxophonist, flautist, and composer David Liebman finds in the The Miami Jazz Project a simpatico group of musicians to echo and recapitulate his interest in the post- Coltrane concatenation of fusion and world music where his career first took off in the 1970s. Liebman is the obvious inspiration for this album, which is spearheaded by one of his long-time saxophone colleagues, Arthur Baron, and features a rhythm section of Abel Pabon on keyboards, Josh Allen on acoustic and electric basses (with Eric England substituting on bass in track 3), Michael Piolet on drums, and Alfredo Chacon on vibraphone and percussion. Liebman, like other master musicians today, is finding ways to collaborate with younger players both as mentor and conversely to assimilate their new ideas. This album works extremely well in bringing the generations together. The musicians are very much in synch with one another and obviously enjoy their interaction. And Liebman has plenty of room to show his wares, while the others make significant contributions as well.

All the musicians except Liebman are or have been based in and around Miami, which explains the name of the Project. Miami is an eclectic town with many ethnic groups, a strong Caribbean influence, and an unheralded jazz tradition akin to New Orleans. For example, the legendary drummer Mickey Roker became interested in jazz as a child by following street bands around the city. South Beach has been a hub of diverse musical developments. With Liebman's inspiration, this album coalesces that energy into a celebration of John Coltrane's legacy re-interpreted in terms of the jazz fusion genre initiated by Weather Report, Miles Davis, Chick Corea, and others soon after Trane's untimely passing.

Liebman participated in both the post-Coltrane movement and fusion, and he gives this album a special impetus that makes the fusion of bop, rhythm and blues, and electronic sounds take on the spirit of Trane, with the heightened emotionality and reaching towards the spirit world that were hallmarks of Coltrane's music. Some parts of the recording echo A Love Supreme (Impulse, 1965) and others are reminiscent of the formidable John Coltrane Quartet. The music has the wildness of fusion and at the same time the improvisational expressiveness and control of Trane. In addition to Liebman, the player whose impact is most fully felt throughout is the remarkable keyboardist Abel Pabon, who pulls out all the synthesizer capability of modern keyboards to produce sonorities and sound streams that enrich and enhance the ensemble effect.

Most of the tunes consist of originals by Liebman and by Baron, but the opening track is a Coltrane standard, "Dahomey Dance," and there are ample references to Trane's album Ole Coltrane (Atlantic, 1961) on which the song first appeared. This is an energetic "trance dance" in which Liebman emulates Coltrane in his solo choruses while Baron's and Liebman's operation as a unit establishes a rhythm and blues feel.

"Lordy Lourdes" was composed by Baron and Pabon, and the latter's keyboard intro with synthesizer effects shouts out "jazz fusion!" A touch of world music is added by the flute. The whole mix takes on a Middle Eastern pulse and modal sound. The flute plays against Pabon's funky rhythms, and we then hear a "violin" interlude, which we assume is a synthesized sound. The work builds in intensity and becomes a seductive middle-eastern dance. The piece concludes with a mysterious fade-out by the flute.

The mid-east theme continues with Baron's"Jinnistan," which derives from Arabian folkloric spirits in ancient Persia with powers that could influence people to do good or evil. The angelic and demonic energy is generated by background and foreground riffing, and there is a nothing-short-of fabulous tenor saxophone solo by Liebman which someone ought to transcribe as a prime example of his iconic playing.

"Winter Day," a Liebman original ballad, stands in sharp contrast to the previous tracks. A light samba rhythm leads up to a polyrhythmic combination of 2/4 walk and interspersed waltz time. Kudos to drummer Piolet who makes the polyrhythmic effect work successfully. When the flute comes in, its sweet improvising reminds us of Jobim, a feeling which is taken further by Pabon's piano solo.

"Mr. Q," written by Baron as homage to Coltrane and Elvin Jones, emphasizes drums and percussion, and also features a call and response melody line anchored by a minor vamp. There is chant-like bridge which contains more than a hint of "A Love Supreme." This is sheer Coltrane and Elvin, and we can also hear echoes of Jimmy Garrison and McCoy Tyner, but the keyboard work adds a citrus twist to McCoy. The combination of Allen's electric bass, along with drums and percussion, creates a sustained rhythmic impact. Liebman again contributes an outstanding tenor saxophone solo which sounds like he is channeling Trane.

"Intro To Slow Dance on the Killing Ground: Blessings Eternal" utilizes a synthesized background against the flute to iniitiate the listener to the discourse of the next track, "Slow Dance on the Killing Ground," a piece originally recorded by Lieb in the 1970s in a little known album called Light'n Up Please (A and M Records, 1977). Both the intro and the main theme develop a sinister quality which perhaps represents a protest of the Viet Nam war and is certainly appropriate for the terrorism that haunts our world today. Thanks especially to Pabon's use of synthesizer effects, the piece could easily provide cinematic background music to film footage where danger and conflict are encountered.

"Sheer Joy " is a newer Liebman ballad (which he indicates in the liner notes is a pun on the name of a German saxophonist and computer wiz named Scheer, who commissioned the piece). Pabon develops a keyboard sound somewhere between a piano, marimba, chimes, and guitar. (Or is it Chacon's vibraphone we're hearing? There is some prestidigitation going on.) Liebman's soprano saxophone improvisation contains a characteristic sense of the blues.

Liebman's original, the very searching "Missing Person," is very French-flavored and in a sense a slow movement rather than a song. It is done as a soprano (Liebman) and tenor saxophone (Baron) duo meant to highlight two horns in a playful conversation, setting up an improvisatory atmosphere. According to Liebman in the liner notes, "The title refers to people we meet in life who may not be technically 'missing' but in social interaction don't seem to be on the same page as oneself or what is happening around them....physically present, but mentally not all there." The choice of metaphor, is, however, perhaps best left to the listener.

Baron wrote "Tu Amor Neri" as a concluding piece in homage to Afro-Cuban dancer and choreographer Neri Torres. Says Baron, "It is essentially a Bolero played in 4/4 time with a jazz feel. The tune ended up being a fairly complex composition with an introduction followed by five sections, each expressing different moods and dynamics embellished by Lieb's signature harmonic concepts." The piece gently incorporates many of the features of the previous tracks in a kind of summary.