BY GLENN ASTARITA
November 9, 2007
Sign in to view read count 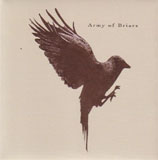 Over the years, I've become weaned on expecting the unexpected from this avant-garde U.K.-based record label. The Army of Briars is an utterly delightful and modernized spin on British folk music. Furthering time-honored concepts set forth by Pentangle and other eminent British folk entities, this outing presents Keith Jafrates' dream-swept lyrics, with vocals by Julie and Tim Cole. However, instrumentalists performing electric bass, violin, bass flute, laptops and a brass quintet provide the contemporary edge here.

Cole's angelic vocalizations are supplanted by subtle hints of world music and effects-driven existential backdrops, yet each piece carries its weight via divergent aspects. But nothing gets out of hand or becomes orchestrated into oblivion, with the brass quintet enamoring a blissful musical terrain on "A Lesson. While saxophonist/keyboardist Martin Archer adorns some of these works with silvery linings, the inherent attributes of this program vary slightly. Tim Cole, on guitar and keyboards, also engages in beautiful harmonies with his better-half, atop various underpinnings. The ensemble also incorporates subliminal aspects of classic progressive rock into its stately themes. Chalk it all up to a sequence of compositions that rather uncannily morph into a wondrously envisioned project which makes uncommonly perfect sense.

To fall; Four Riddles; Mist on the barrows; The deep park; A Lesson; Hunting stone and light; Who but I ate the fruit of your lips; I traveled north to hide; On nine barrow down; Where the blue goes dark and birdless; Gatherer of excited moons.

About Army of Briars