By Jack Bowers
September 5, 2020
Sign in to view read count 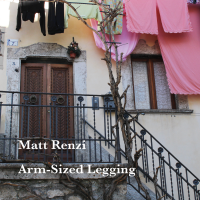 Arm-Sized Legging, saxophonist Matt Renzi's sixth album as leader, features his Cello Quartet, basically a piano-less jazz trio with cello added, for what purpose it is hard to ascertain. Cellos aren't normally associated with jazz—as some would argue, for good reason—and this session does little to further their cause. Yes, the cello does add another "voice," but whether that voice is gratifying or even necessary rests in large measure in the ears of the hearkener. Clearly, it is not a solo voice, at least not as employed by Renzi, being relegated for the most part to the realm of harmony and counterpoint. The cello is most prominent on the esoteric "Family Picnic," on which Daniela Petracci wields the stringed instrument in place of Jessica Ivry who is heard on the album's seven other tracks.

Rather than dwell on that, one might imagine what the group would sound like and how it would succeed without the cello, and the answer is, not bad. Not to demean the cello, but all things considered, it really doesn't add much to the session's vitality or ambience. Renzi is an accomplished performer on tenor saxophone, clarinet, flute or bass clarinet, each of which he employs at one time or another, while bassist John Wiitala and drummer Tim Bulkley are capable if not exceptional teammates who simply carry out their backup duties without fuss or fanfare.

That brings us to the music, all of which was written and scored by Renzi. While the range is wide, much of it is within the purview of what is generally recognized as middle-of-the-road, or orthodox, jazz, albeit with an avant-garde veneer. The exceptions are "Family Picnic," a discordant pastiche that is basically cello / flute all the way, and "Hop Skip and a Jump," whose dissonance becomes pronounced after an harmonious introduction. There are two numbers that Renzi labels—credibly—chamber jazz: "Alfama" and "Alfama II." The others—"Twenty Six for Three," "Cave Tune," Running Time," "Little Idea"—showcase Renzi's evocative tenor against a backdrop that is more or less tradition-bound, and one of which—"Cave Tune"—bears an explicit Coltrane signature.

For modernists who are attuned to jazz that questions norms and boundaries, an Arm-Sized Legging may be the perfect fit. Renzi, however, could have removed the cello from his wardrobe and been none the worse for wear.