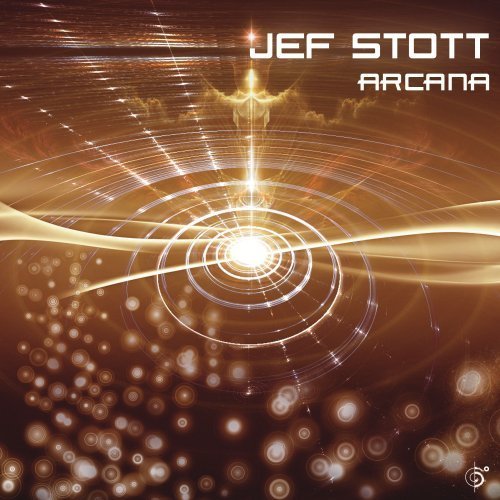 Arkana is the tenth release by multi-instrumentalist and ethno-conceptualist Jef Stott, one of several artists forging new music through the merger of modern technology and electronic music with indigenous and historical music from around the world—in Stott's case, India and the surrounding region. And the world came very close to never hearing it: Thieves broke into and robbed Stott's apartment and all his computer equipment—including the hard drive with the finished Arkana—was stolen. "I just went back into the studio and made this album," he now recalls. "It's about reclaiming my place in the world, and bringing really powerful female energy back into my life."

Stott wrote or co-wrote every piece and simmers each one for a long and slow boil, which gives each groove plenty of time to steep into your muscle and mental memory. The opening "Deep Playa" (with vocalist Sonja Drakulich providing the "female energy") and subsequent "The Promise" illustrate two sides of the same coin with chattering electronic beats and rhythms that bridge the ancient and modern aspects of Stott's musical vision.

Co-composed with and featuring the vocals of Sophie Mae Lin, "Pulling of the Tide" sounds like a murky dream and casts a somber spell that should prove quite popular with the "tween Twilight" crowd.

"Le Club Lebanon" dances to a far more edgy drum beat. Stott mixes up a tense electronic groove that crackles with all the nervous energy of a disco under siege in a Middle Eastern war zone. The meaning of the words in MC Rai's incantation is less important than their itchy and intense sound, an intensity matched by string passages that divebomb in and out of the atmospheric mix (Stott has "explained" this tune as "Rachid Taha meets The Clash meets electro"). Stott rocks the "Gwana Jam" beat even harder and bounces the bass with considerably more rubber in its funk.

"I wanted to have a narrative, but also deliver on another level," Stott concludes. "The album is meant to be an imaginary soundtrack to an epic adventure film set far in the distant future. Behind it all is a really strong athletic female goddess with a huge sword in her hand. She's a warrior of light. She's always strong and compassionate, but she knows how to use her sword."