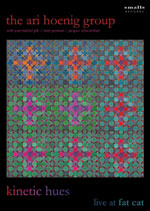 When truly creative artists get together, they issue a memorable proclamation. Ari Hoenig and Jean-Michel Pilc throw ideas around the room like rockets and missiles, as they work out in the intimate performance space at Fat Cat with a live audience to spur them on. Their music rains fire all night long.

Since it's Hoenig's date, the camera emphasizes his work ethic much of the time. You can see the effort pouring into the stickwork that he applies liberally, as he and his musical partners interpret each selection like no one has done before them. This is a very unique session.

An extended romp on "Summertime produces dissonant tone clusters and heavy rhythmic strides. Both bass and drums support the pianist's lengthy tirade with powerful strokes. Gershwin's original emotional setting for the piece has been multiplied a hundred-fold, as the trio gathers up its blues-drenched comfort, rearranges it, and comes up with an earth-shaking adventure. The camera lets you in on the secrets, as each artist grapples with his instrument and pours the lifeblood out of it.

Applying various textures during the night's performance, Hoenig alters the pitch of his drum and approaches his cymbals to suit the moment. With arms flying in all directions, motion becomes a part of the performance. Together, he and Pilc create a powerful affair that's filled with emotional turmoil.

The drummer's "For Tracy moves slowly with a heartfelt ballad aura. Applying brushes in support of the harmonic layers issuing from piano and bass, Hoenig makes the piece swirl around the room so that it gathers momentum gradually. The trio's rich sonority and dense harmony say, "Ballad, while the interaction of the three artists says, "Creative improvisation.

Con Alma begins with rhythmic two-against-three handclaps and taps on the wooden surface of the piano before diving into a more traditional Latin jazz approach. Here, the trio pores lovingly over a familiar melody that finds itself gradually getting hotter and hotter.

Both "Giant Steps and "I Mean You come at a blazing-fast pace, throwing restraint to the four winds. Throughout the night's highly recommended performance, Ari Hoenig and his musical partners forge a seamless bridge that is designed to carry Jazz's modern mainstream away from the ordinary and forward to new horizons.