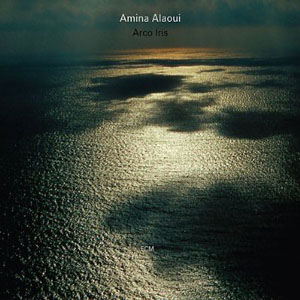 Following her outstanding performance with the cross-cultural, century-spanning ensemble of Norwegian keyboardist/composer Jon Balke's Siwan (ECM, 2009), it's no surprise that the German label has tapped into the Moroccan singer for an album of her own. But as sprawling and ambitious as Siwan was, Arco Iris is, while being no less dramatic, on a much smaller scale; its greatest strength coming from Alaoui's nuanced delivery and acute ability to unveil the hidden power in a set of music that, like Siwan, spans centuries—as far back as 11th century Seville King Al Mutimid Ibn Abbad, and as recent as 20th century Spanish songwriter, Antonio de Sousa Freitas.

Backed by an outstanding multinational quintet that, in its reliance on acoustic instruments—violin, oud, flamenco guitar, mandolin and percussion—feels utterly timeless in the 21st century, Arco Iris pays sincere reverence to Alaoui's own roots. Born in Fez, she first studied Gharnati—a musical variant originating in Al-Andalus, stemming from Moroccan and Algerian traditions—but by assimilating a variety of cultural markers both near and far, Arco Iris possesses a much broader reach, a successful attainment of Alaoui's assertion, "I am an artist of the present. I abstain from simply copying the styles of the past."

The music of another ECM artist, Tunisan oudist Anouar Brahem, provides something of a touchstone in its more contemplative moments—less The Astounding Eyes of Rita 2009), though, and more Astrakan Café (2000). Fellow Tunisian oudist, Sofiane Negra is in a considerably different context, sharing the stage with Barcelonan flamenco guitarist José Luis Montón and Brazilian-born/Portuguese-based mandolinist Eduardo Miranda, though on the collaborative tracks they're as often heard in entwining melodies, rather than dense chordal engagements. Add Tunisian violinist Saïfallah Ben Abderrazak, and "Ya Laylo Layl" becomes a cornerstone and highlight, as it moves from a soaring a capella violin intro, to its dynamic middle section, oud and violin coming together in unison lines an octave apart beneath Alaoui's lilting lyricism, and driven by a propulsive 5/4 pulse from percussionist Idriss Agnel (Alaoui's son), but turning more introspective for a lengthy coda where improvisation is key.

Oud and flamenco guitar conjoin on the melancholy "Fade menor," Alaoui singing plaintively of the darker side of love, while on "Moradia," Negra's opening oud solo joins haunting lines and visceral bends to create one of Arco Iris' quiet tour de forces, an instrumental track that then takes gentler form as a duet where Miranda solos with spare urgency over Montón's soft arpeggios. "Las Morillas de Jaén," a more fervent song of three Moorish girls that represents both Alaoui and Arco Iris at its most potent, even as its dynamics ebb and flow in a reading almost unrecognizable to saxophonist Jan Garbarek's version with the Hilliard Ensemble on Officium Novum (ECM, 2010).

If much of this feels of antiquity, Agnel's soft electric guitar on "Que fare" places Arco Iris firmly in the 21st century, even as Alaoui—a singer whose greatest potential is always kept simmering just below the surface—she delivers, here and throughout this compelling recording, with equal measures grace, emotive power and phrasing filled with evocative implication.