By Stephen Wood
February 22, 2007
Sign in to view read count 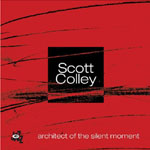 Scott Colley's ability to fuse free-form improvisation, complex meters, grooving melodies, rock harmonies and atonality has solidified his position as a New York jazz musician of the new generation. Unfortunately we live in a plagued era in which musical complexity is worth just as much as—if not more than—musical accessibility and the communication of ideas. Architect of the Silent Moment suffers from at least three of the symptoms endemic to this ailment.

Symptom 1: Overplaying. Much of the record comes across as a musician's exercise in who can play the quickest and most complex lines or rhythms. As a result, the players take little time to explore single melodic ideas. Instead, we get an epileptic survey of possibilities that are infrequently enriched.

Symptom 2: Unregisterable melodies. As jazz musicians have grown more technically advanced, they have increasingly sought to imbue their compositions with greater sophistication. In many cases, Colley's being one of them, this comes at a high price: the loss of the listener. You don't need to play tunes out of the American Songbook in order to engage a listener. All you need is the tact to realize what's appealing. This is not to say that a musician should strive to record the most anodyne music possible. Rather, it is a strategic suggestion.

Once a listener is caught by a tune, it becomes much easier to experiment with the bounds of tonality and meter and bring the listener along. Colley's compositions begin in the outer reaches of both and don't even stop once to look back and notice the listener so far behind. Our ears have no guidance and no orientation, except for those given to us by the musicians. Colley's compositions are, in many ways, intellectually unparseable.

Symptom 3: Opaque communication. The most exciting albums are made what they are by musicianship. In jazz, an improvisational music, this requires not only awareness of other musicians, but a willingness to carry and play off of their extemporaneous ideas. To this album's detriment, the rhythm section functions more as a complex background behind the soloist than it plays a conversational role. Conversely, the soloists don't do much to frame their ideas in the context of the rhythm section's groove. I imagine the album's producer could have recorded the two parts separately and overdubbed them with much the same success.

All that said, there are features which keep the album healthy. For one, the entirety of the record is ripe with virtuosic playing. The beautifully sentimental "Masoosong, on which trumpeter Ralph Alessi and harmonica player Gregoire Maret share the melody, is the album's unrivaled highlight. The rhythm, melody and improvisation are all well-thought out and lucidly expressed. Maret's emotional solo broadcasts his unique interpretation of both jazz and the harmonica, also revealing the influence that has resulted from his time in Pat Metheny's band. Jason Moran's piano playing is a vortex of well-placed notes. In a more ideal world, he would have taken Craig Taborn's spot as the man at the keys.

Yet in spite of occasional glimmers of musicianship and promise, the record suffers from one crippling ailment from the outset: the album title is unfairly misleading. With the record fresh in my mind, I'd recommend renaming it Destruction of the Silent Moment.