By James Nadal
September 27, 2012
Sign in to view read count 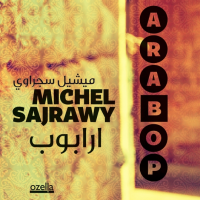 Arabian music is distinguished by its historical documentation as far back as the seventh century. If performed and heard today, it is readily identifiable for its distinct configuration or format, based on maqamat (modes) and jins (sets of notes), which provide its unique ethnic sound. Enter into this equation guitarist Michel Sajrawy, who catapults Arabian-derived music into the stratosphere with Arabop. He has perfected his ability to perform exotic arrangements on his trusted Fender Stratocaster by bending and coercing his strings into a swift sequence of microtones and quarter-notes, all done with cultural authenticity fused with rock, blues and bop.

The record opens with the brisk "Tojann," as darbuka percussionist Wissam Arram sets a frenetic pace for Sajrawy to exhibit his fluidity and skills. "Batumi," based on ancient Turkish traditions, is another ambitious number which evokes imagery of legendary kingdoms with a twist. Kudos must go out to accompanying saxophonists Amiram Granot and Maali Klar, for their outstanding melodic phrasings and interpretations on their featured tracks. While Sajrawy is, of course, the primary soloist, oudist Samir Makhoul instinctively intertwines his playing on "1 Count Before 40" and adds a spellbinding chant on the mellow "Ya Lel." This measured tempo, also evident on "Syncretic Beliefs," "Invention," and "Hal Asmar Ellon," allows the music to take a deep breath and expand into serious freeform contemplative space, meandering through the blues and ending with a festive take on the Egyptian classic "Longa Farah Faza," as a farewell to this melodic journey, covering vast terrain with new friends.

Sajrawy is a Palestinian Christian who has recruited premier Israeli musicians from Nazareth, where Arabop was produced and recorded. This should speak volumes in praise of the power of the music, and might explain the impressive energy level of this recording. Though this will be categorized in the media as world music, it is much more than that. It is a positive assertion that everything is possible.