BY EDWARD BLANCO
February 4, 2012
Sign in to view read count 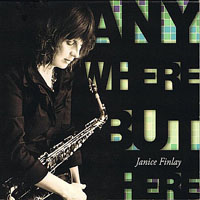 Saxophonist Janice Finlay has been voted "top sax" by the jazz fans of Winnipeg, Canada for three consecutive years. An educator by profession at the Manitoba Conservatory of Music & Arts, Finlay is a first-call musician who leads several groups and is a long-time member of the Ron Paley Big Band. A stalwart of the Winnipeg jazz scene, she also performs with the city's Symphony Orchestra and Jazz Orchestra. Leading a core quintet of Canadian-based players including award-winning bassist Jodi Proznick and legendary pianist/vibraphonist Don Thompson, Finlay delivers Anywhere But Here, the long-awaited follow up to her debut, She's Hip (Boathouse Records, 2002).

Containing eight stellar originals and an entirely new and more down tempo rendition of the jazz classic "Bye Bye Blackbird" with Thompson and Proznick particularly pronounced, the album sparkles in the finest hard bop and modern jazz traditions. The swinging "The Houston Shuffle" kicks the door open with the first of many sizzling sax solos, while the bolero-like title piece features Finlay on flute, with expressive contributions from American expat drummer Quincy Davis and Winnipeg-born guitarist Ron Halldorson.

The melody-rich "When I Go Away" is a highlights of the disc, with Halldorson and Thompson (on vibes) accompanying Finlay's creamy tenor solo. Proznick's strong bass work and mysterious introduction to "The Pillaging Pug" disguises what is truly a burner, while singer/songwriter Erin Propp sings on a brief duo with Thompson, "Remember Me."

With Thompson and Proznick's excellent accompaniment, Finlay plays soft and tender on the album's first ballad, "Song for Selma." The centerpiece of the album is the seventeen-minute "A Harbinger of Swing to Come-Movements I & II," its first eight minutes revealing a good measure of swinging bop rhythms that showcase some of Thompson's most vibrant vibes work against Finlay's hard tenor. The second half of the suite offers contrast, as it gently ushers in the other sensitive ballad portion of the album, ending on a softer note than it began.

Finlay's soulful saxophone style may well be one of the reasons why Winnipeg jazz audiences have crowned her "top sax" numerous times, but her audacious Anywhere But Here, confirms her inclusion as a top-tier jazz artist anywhere in the world.

The Houston Shuffle; Anywhere But Here; Bye Bye Blackbird; When I Go Away; The Pillaging Pug; Good Neighbors (Make Great Fences); Remember Me; Song for Selim; A Harbinger of Swing to Come--Movements I & II.