BY MARK CORROTO
December 9, 2020
Sign in to view read count 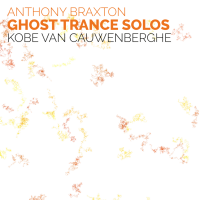 Anthony Braxton's Ghost Trance Music (GTM) has been explained as his interpretation of Native American ritualistic circle or ghost dances, the means by which a people connected to their ancestors. The music appears to be unbounded, and it exists before the musicians take the stage and continues long after the performance has concluded. If we carry that concept into the 21st century, the music could have, maybe should have been, the score to The Matrix science fiction film series. Imagine all those green numbers, computer code, flowing in endless patterns invisible to the uninitiated.

Belgian guitarist Kobe Van Cauwenberghe steps inside that matrix with his performance of three Braxton compositions with his Ghost Trance Solos by layering loops and electronics over his guitar in real time. The effect is astonishing and as hypnotic as an ensemble performance. The three performances track the development of Braxton's GTM concept, as if Van Cauwenberghe were venturing deeper into the matrix, peeling away code to reveal the raw specter of the sound. "Composition No. 255" tracks that perpetual motion machine first with a single guitar line, then a looped guitar and electronics. He adds sung/spoken numbers and vowel sounds combinations that would not be out of place in an Alessandro Bosetti performance. Even when the pulse fades and soloing begins, that flowing matrix of energy persists. That unstated trance dance is peeled back even further with "Composition No. 284," and "Composition No. 358," where the guitarist adds dialogue from a park ranger's description of an imaginary trip. There is no requirement that the listener choose between the two pills; Van Cauwenberghe has chosen the red pill for us.