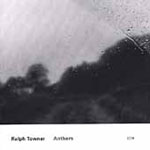 Ralph Towner recently turned 60, and his age has only made him more eloquent, more imaginative, more able to cast a spell. Anthem, his new solo guitar record and his 20th title for ECM, is the follow-up to 1997's solo recital, Ana. It also coincides with ECM's reissue of Diary, Towner's 1974 effort, on which he plays both guitar and his first instrument, piano. (He didn't begin playing guitar until age 23.) These solo albums are precious few in number—be sure not to overlook 1980's Solo Concert—and Towner has never before released two of them consecutively.

Unlike Ana, the second half of which was devoted to the 12-string, Anthem finds Towner mainly playing nylon-string. The exceptions are the opener, "Solitary Woman," with its ringing harmonies and loose, flowing rhythm; "Three Comments," a minimalist mini-suite; and "Goodbye, Pork Pie Hat," the Mingus classic, offered as a brief and moving finale. The nylon-string pieces are characteristically brilliant: no one but Towner could think up the spine-tingling arpeggiated runs of "The Lutemaker," or the entirely single-note storyline of the "Four Comets" suite, or the soulful mood and tempo of "The Prowler," or the crystalline chords of "Very Late"—clearly a rejoinder to Bill Evans's "Very Early." Towner also puts his stamp on Scott LaFaro's "Gloria's Step," which like the Mingus tune is one of jazz's more enigmatic masterpieces.

Some lazily relegate Towner (and other ECM artists) to the New Age category. But New Age music is notorious for its stasis, whereas Towner's is full of movement. The improvisational energy and highly involved counterpoint that Towner brings to all his pieces is cut from an entirely different cloth. Moreover, Towner's restless straddling of genres speaks to a depth of musical knowledge that purveyors of "mood music" rarely possess, if ever. His guitar may soothe, certainly. But with its Bach-like propulsion, its exquisitely balanced blend of solemnity and playfulness, and its references to classical, jazz, and avant-garde musics, Towner's work is not a lightweight thing. Anthem is perhaps the finest example yet of its luminescence.