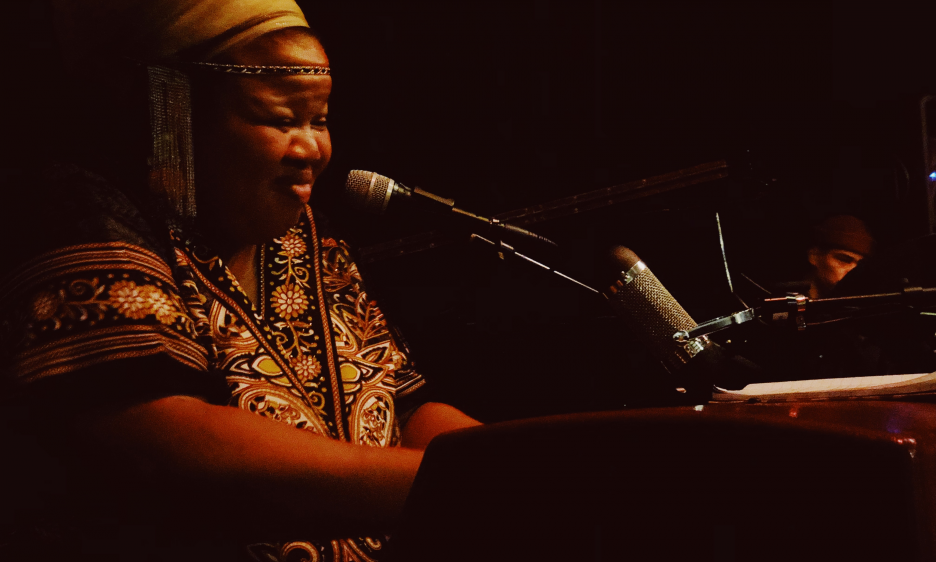 BY KEVIN PRESS
February 1, 2019
Sign in to view read count

I had forgotten that I’d started a 401(k). They were just taking it out of my check. I was like hold up, I’m about to retire right now.
&#151Angel Bat Dawid

Angel Bat Dawid's new album The Oracle is a thing of unique beauty. Lightning in a bottle. What began as a collection of tunes recorded so that her band members who don't read sheet music could learn the new material turns out to be an inspired collection of afro-centric love and happiness.

The Chicago-based clarinetist, vocalist and composer has been active in the local avant-garde scene for about five years. She is emerging as an important artist with much to say about the music's rich history and the protracted challenges facing black families in today's America.

All About Jazz: Did you grow up around music?

Angel Bat Dawid: Yes, my dad has a lot of music. You know how younger generations are like, we don't like our parents' music? We always thought our dad's music was cool. He listened to funk, jazz, rock and everything from the 1970s. We loved it. My mom listened to a lot of classical so we loved classical. We loved musicals. We'd watch so many movies in my house. Music, art, spirituality and books: it was like an amusement park of all of that in our house. My parents were very strict, so we couldn't do a lot of stuff. We'd just be inside the house soaking all that in.

AAJ: Those styles have all stood the test of time.

ABD: Very much so. It's a huge part of my own practice. I'm addicted to vinyl records, I worked in a record store for a while. You know, once those records get you, you're an addict because the sound is so different. I spend a lot of time listening to different things. It influences how you practice; it influences your composition technique. School is great, but if you're not listening to the masters ...

You can go to John Coltrane himself, get a record, and play with it. I play with my records, all of them. My whole record collection is jazz, just straight-up jazz. I love the obscure jazz, especially the avant-garde. It does something to me.

AAJ: You took a year off, lived off your savings, to concentrate on being an artist.

ABD: I was in my early 20s. I was diagnosed with a brain tumor, my health was all over the place. I was working and I was really miserable. I had a good job that paid well, but I was miserable because I'd invested so much time and energy throughout my childhood to be a musician. And I was at a point in my 20s where it was like, yo, music is secondary in my life? That was problematic.

I had forgotten that I'd started a 401(k). They were just taking it out of my check. I was like hold up, I'm about to retire right now. I took my savings—this was about 2014—and I was like, I've got to really try to be a musician full time.

There were times when I was working that people would ask me to do stuff and I couldn't because I had to work the next day. I had to flip this so that my life was about doing more of what I want to do—music. I had to start changing my thought first and foremost. Affirmations and creative visualizations—hard core. Getting up every morning and putting out into the universe what I choose to do. And it worked. When I started doing that, all these circumstances started lining up. I'm talking to you right now because I made those steps in my mind first.

Music has the ability to change situations. It wasn't just my personal life that I wanted to change. My identity as a black woman is very important to me. The situation of having a black identity is traumatic, and music and the arts have always been what black folks use to deal with oppression. Man, this stuff can shut down kingdoms and governments. A musician can go anywhere and play and have the power to put people in a place of ease. Even the hardest people in the world, that have so much inside of them, they can listen to music and feel better. That's a lot of power.

AAJ: What's striking about your album is that everything you've described is wrapped in this warm, family-centric, positive expression. Clearly, that's where you're coming from.

ABD: Yes. I'm very influenced by the Association for the Advancement of Creative Musicians. It's a collective in Chicago created in the 1960s. They didn't want to play what you heard in all the jazz clubs. They wanted to play original music. Muhal Richard Abrams was one of the founding members. I had an opportunity to meet him during that year I took off in 2014. He did this performance with Roscoe Mitchell and it was mind blowing. I went up to him afterwards and thanked him. He told me: "If you take care of the music, it will take care of you."

The jam session is so important. You don't have to play an instrument. You can just hum together with your friends. You can clap your hands. That is a very human thing. We live in this day and age of screens and technology. Those are not human things. It's great, but because we live in a non-human world, we're going to have to be way more intentional about being human beings. Music is a very human thing—playing music together. We've got to actually see each other, touch each other and laugh with each other.

AAJ: And yet you chose to go almost completely solo with the album.

ABD: I didn't know I was going to put out an album. Most of the songs were developed because I had a show. One of my personal challenges as a composer was, if I've got a show, I'm going to compose something new. I would compose for a band, and I'd write it out. But I have a lot of musicians that I work with that don't read music. I don't fault them for that. Just because someone doesn't read music, doesn't mean they don't have a great ear that's just as advanced as someone who reads. I know a lot of musicians like that. Great composers who compose completely by ear. So I would record all the parts, and that's really where most of the songs came from. [Cofounder of International Anthem] Scottie McNiece—he's my friend first, and we play music together—said Angel, have you ever thought about doing an album? Why don't you send me some of the songs you have. He's like hey, this is something. It's cool.

ABD: Chicago has a vibe. We came to Chicago when I was in high school. I didn't want to come, I was tired of being the new girl. But I'm so glad we did. Chicago is the land of the improvisational musician. If there's anywhere that's very open and accepting to experimentation in music, the avant-garde, it's Chicago. There's this community here where you're free to explore things and have a group of people who support you in exploring those things. It's really great.

AAJ: What's next for you?

ABD: I have a residency in a space here in Chicago called Elastic Arts. It's my first residency and it's called Mothership 9. I'm going to build a sonic mythological spaceship. And I'm serious about it. There will be nine parts to the ship. The first is going to be February 9, which is also cassette release day for the album. It's going to be a fashion show, because when you're in space, you have to change your attire. And it's going to be a conversation. I want a lot more education, especially in the experimental free jazz world. People don't know the influence of black musicians to that genre.

What I'm doing isn't new. I'm here because of these elders who were doing this stuff, and who are still doing this stuff today. You all need to know their influence. I'm very influenced by Sun Ra and his whole take on myth science. Being a myth scientist is just like being a scientist, it's real. It's not a joke. Sun Ra would create a mythology, and mythology is nothing but stories that point to important truths. I'm taking myth science and using that to create these events. I'm building a mothership for us to get up out of this stuff that we don't like about this myth that we are living in. There are too many myths about black folks that are not true.