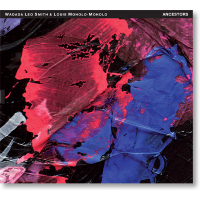 There is a natural fit between drums and trumpet. It stretches back all the way into prehistory, with the shamanistic combination of animal horns and percussive devices, persisting up until the early twentieth century in military drum and bugle corps who passed signals and directed troop movement. That synergy continues to bear artistic fruit to the present day in jazz, nowhere more so than in the work of distinguished trumpeter Wadada Leo Smith. He already numbers four such meetings in an extensive discography, including standouts on Wisdom In Time (Intakt, 2007), with Gunter Baby Sommer, and America (Tzadik, 2009), with Jack DeJohnette. Now, with South African drummer Louis Moholo-Moholo, he has added a fifth, recorded in Finland in early 2011.

Over a long career, Moholo has proved himself a fantastic improviser, both sensitive and selfless; witness his wonderful pairing with pianist Marilyn Crispell on Sibanye (We Are One) (Intakt, 2008). He brings that same sensibility to this date, allied with an orchestral conception which finds him carefully deploying the component parts of his kit to construct a rhythmic latticework which both supports and challenges the trumpeter. For his part, Smith masterfully utilizes space and silence, along with pure-toned fanfares mixed with buzzing frayed edges and breathy susurrations, sometimes all within a single piece.

Together the duo crafts an understated program which features compositions from each alongside two spontaneous creations. The two establish an extraordinary colloquy from the off on "Moholo-Moholo/Golden Spirit," where Smith's delicate tip toeing muted trumpet unfurls tightly coiled melodies against a backdrop of cymbal swishes, punctuated by regular accented crashes, evoking thoughts of breathing and heartbeats. Later on Moholo's elegiac "Siholaro," dedicated to his father, the American rides the wave of a pulsing one-man drum choir. But it is the expansive title track, a five-part suite, improvised within a preconceived structure, where everything comes together. Framed by two percussion duets, the veteran pair conducts a perfectly formed dialogue, with Smith channeling varying trumpet voices atop an insistent tattoo. During the final selection, Moholo intones the names of musical heroes, past and present, including "Sonny Rollins, we love you....you don't have to love us, we love you." On this showing it would be hard for anyone not to reciprocate.