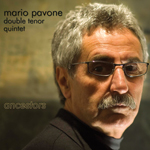 It might be cliche to say that the recording Ancestors by Mario Pavone's Double Tenor Quintet has caught lightning in a bottle, but this is indeed a potent feat of extraordinary music making. The bassist/leader became famous as the primary accompanist for the late saxophonist Thomas Chapin. In the ten years since Chapin's death in 1998, Pavone has distinguished himself with his own groups such as Trio Arc, with Paul Bley and Matt Wilson, his various quartets and quintets, plus his sideman sessions with guitarist Michael Musillami.

Pavone's Double Tenor Quintet assembles long-time collaborators into a new and a very stirring combination. The quintet's rhythm section includes pianist Peter Madsen, who has played on Pavone's last nine CDs, and drummer Gerald Cleaver, a frequent Pavone collaborator and sideman of choice for the likes of Joe Morris, JD Allen, and Charles Gayle. The fireworks here are brought about by pairing two muscular saxophonists, Tony Malaby and Jimmy Greene, with this charged rhythm section.

Ancestors, dedicated to Dewey Redman and Andrew Hill, was composed by Pavone, with six of its eight tracks arranged by Musillami and guest trumpeters Steven Bernstein and Dave Ballou. Like the leader, his guest arrangers prefer tight formats, played over a challenging roadmap. The disc comes out swinging with the title track, the two tenors pacing lockstep until each solos, Malaby smearing rapid notes to Greene's studied and paced effort. The contrast reveals plot, but neither saxophonist can escape the vortex of energy created by the rhythm section here, and throughout this supercharged session.

"Tomes" opens with the pulse of Pavone and Cleaver, and once again Malaby and Greene are challenged to keep up. The pairing of tenor and soprano saxophones here emphasizes their similarities before Madsen shreds a Cecil Taylor romp of notes. Elsewhere Madsen leads the band on the intricacy of the Musillami-arranged "Beige Structure," while Bernstein's arrangement of "Arc For a Puppy" is part Raymond Scott, part Andrew Hill—a kind of cartoon soundtrack for watchmakers. There is no let up on the groove-paced "Pachuca," arranged by Ballou. The contrast of pace maintained by the saxophonists emphasizes the energy of the composition and the steam of the rhythm section.

Pavone's energy and pace may be challenging, but trying to keep up is a thing of beauty.