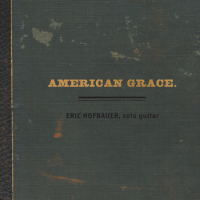 Origami or balloon animals, it is always interesting what a solo artist can do with his bare hands. Same for a gifted guitarist like Eric Hofbauer, whose American Grace completes a trilogy of solo recordings that began with American Vanity (Creative Nation, 2004), and was followed by American Fear! (Creative Nation, 2010). In these three outing, he has mined the nation's post- 9/11 psyche via pop tunes, jazz, blues, and instant composing.

Although a jazz educator and graduate of Oberlin and New England Conservatory, Hofbauer sometimes plays his guitar here as if he is a self-taught outsider artist. An Altoids box gives him the dobro sound of a slide guitar on Blind Willie Johnson's blues, "God Moves On the Water." Elsewhere the crackle old vinyl is the introduction to Lennon/McCartney's "Dear Prudence," which he then takes through folk and jazz accents. Like his previous solo discs, the music is presented as outwardly simple, but crammed full of ideas and extended techniques.

Hofbauer plays the guitar like Derek Bailey, if Derek Bailey happened to be born in Mississippi instead of Sheffield England. He chisels sounds both primitive and modern, sometimes simultaneously. The percussive tapping of "Beat the Drum" gives way to a sympathetic and tender rendition of the singer Cyndi Lauper hit "True Colors," while saxophonist Ornette Coleman's "Peace" is stripped down to a doleful stroll.

In his hands, a guitar can reconfigure "West End Blues" as free jazz or morph Sammy Cahn's classic "Guess I'll Hang My Tears Out To Dry" into a devotional melody. Hofbauer reconfigures melodies as if he were a modern primitive, discovering these methods of music-making afresh.

Kid Justice; Dear Prudence; American Incantation; West End Blues; Beat The Drum; True Colors; Mileage; Cheer Up, Charlie; In Memoriam; Pocket Chops; God Moves On The Water; New American Psalm; Peace; Today, All Day; Stella By Starlight; Ghost In The Machine; Guess I’ll Hang My Tears Out To Dry; And So It Goes; Idumea (And Am I Born To Die?).