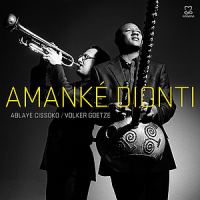 Amanké Dionti is the most curiously beautiful record to hit shelves in the first half of 2012. Senegalese kora master Ablaye Cissoko and German trumpeter Volker Goetze have created a warm, engrossing, transcendent album that's glazed over with stark beauty and slight reverb, making it sound like a meeting of West African ideals and ECM-style production values.

Goetze and Cissoko first crossed paths while performing in the African-European Jazz Orchestra, opening shows for Youssou N'Dour in 2001. Their friendship blossomed from there, but it took a good number of years before they explored their musical partnership on record. Sira (OliqSound, 2008) hinted at the possibilities inherent in this pairing, but both men were still feeling each other out at that point. Since the release of that album, they've had the opportunity to perform together on numerous occasions, deepening their connection and furthering their abilities to complement one another.

Goetze uses his brandy-glazed trumpet tones to warm up the environment and enhance the emotional resonance in Cissoko's playing, but it's Cissoko who create the environments themselves. He takes on the role of the griot—telling stories, setting scenes and providing oral history through music—while Goetze acts as the colorist, shading around the borders of the pieces. Cissoko addresses the de facto enslavement of poor women-turned-maids in his home country ("Amanké Dionti") and the destruction and devastation visited upon the Haitian people ("Haiti"), but the topics at hand aren't always so heavy. "Silo" is an upbeat number that speaks of the need to let the heart act as a guiding force, "Flueve" was written in tribute to the Senegal River and "Togna" is simply about tolerance and mutual understanding.

While it's safe to say that plenty of people who hear this won't understand a single word that Cissoko is singing, he connects on a higher, spiritual plane that moves beyond language. He writes songs that speak to the human spirit and Goetze arranges them in such a fashion that they seem to glow with the light of sonic and emotional purity. Amanké Dionti is a musical revelation and a testament to the skills its two sublimely gifted architects.