Maximize your visibility at All About Jazz by upgrading your musician page from standard to premium. With it, you'll receive All About Jazz home page exposure, a highly stylized / ad-free musician page with bonus features and benefits, an ad, plus you control where you sell your music and so much more.
Learn More
175 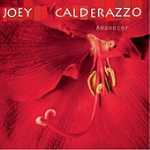 On Amanecer, pianist Joey Calderazzo continues to prove that playing solo is one of his strengths. His fearless and stalwart performances with the Branford Marsalis Quartet have been documented over the last few years but outside of the group his playing soars even more.

Like its predecessor Haiku (Marsalis Music,2004), this recording is intimate, insightful, flowing with a quiet strength as the pianist delivers an effective set of tunes (both solo and with special guests). The music covers originals and a couple of standards as Calderazzo performs impressively in a variety of styles, adding a personal touch of modern expression.

One could picture Calderazzo playing solo at some local venue with a tip jar on the piano. He quietly accepts a few requests, yet transforms them into brilliant displays of agility and adroitness as deceptively brillant chops kick in. You're later introduced to Calderazzo's new-blues standard "Midnight Voyage holding elements of Thelonious Monk quirkiness and Fats Waller playfulness, or the peaceful ponderings of "Sea Glass written by the late great saxophonist, Michael Brecker. And by the time "Toonay —a complex tune of lyrical improvisation—ends, you clearly realize he's not your average house pianist.

The esteemed guests, singer Claudia Acuña and guitarist Romero Lubambo, bring voice and strings with Latin persuasions to the title "Amanecer and "Lara, guided by Calderazzo's light and thoughtful playing. The tone of the recording maintains a tranquil aura after the ingenious solo rendition of "I've Never Been in Love Before and depending upon ones preference, the set might be a little too relaxed. But after a hectic day, its soothing qualities are remarkable. This is another fine "solo effort by Calderazzo; an artist who continues to grow within a group setting and most definitely on his own.