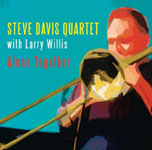 Trombonist Steve Davis has been a veteran of the New York scene for many years. Hailing from Binghamton, New York, he quickly established a presence as one of the best trombonists in the area as a teenager. Upon his arrival in New York City in the mid-1980s, Davis' talents were noticed by such luminaries as drummer Art Blakey and saxophonist Jackie McLean. Davis' quartet release on Mapleshade, Alone Together , is a tip of the hat to his former boss—a wonderful quartet featuring pianist Larry Willis, bassist Nat Reeves and drummer Eric McPherson, all McLean alumni.

The fact that all these men are veterans of McLean's combo gives this session the feeling of a working band, and everyone plays at a high level. Davis and Willis have a great rapport together, with Willis' voicings adding depth to Davis' lines. Larry Willis may perhaps be best known as the pianist in trumpeter Woody Shaw's classic group, and as one of the most sensitive and nuanced disciples of Herbie Hancock.

Willis begins the quartet's take on "Milestones with a lovely introduction before Davis enters with the familiar Miles Davis (by way of John Lewis) melody. The rhythmic feel throughout the piece is refreshingly buoyant as McPherson molds and shapes the time at the bridge, a la a young Tony Williams, allowing for strong statements from Willis and Davis. Willis also creates rhythmic interest behind the trombone solo by often going against the time for tension and release.

The next cut, the classic standard "My Foolish Heart, is taken as a duet. Willis' warm chords frame Davis' dark, burnished tone as he stays close to the melody. The title track is taken with a quasi-Latin/boogaloo eighth note feel. Davis bleeds soul out of his horn with Curtis Fuller-like intensity, while McPherson provides strong commentary on the skins throughout. Fuller's influence is further felt on "United, taken from Art Blakey's book. Davis provides slashing phrasing reminiscent of the elder trombonist on classic Blakey albums such as Free For All (Blue Note, 1964), as McPherson keeps a strong swinging pulse on this fairly straightforward Wayne Shorter composition.

As fine as the music is, the recording quality of this release, which is superb, deserves to be mentioned. The sound is dynamic and very much like a session at Rudy Van Gelder's original Hackensack living room studio combined with the intimacy of the many studio dates on Pablo. The recording is direct to two-track analog tape and minimally miked, capturing the nuances of Willis' piano, the woodiness of the bass, and all of the air control flowing through the trombone. Free of compression and other tweaks, this is how every new acoustic jazz album should sound. Overall, Steve Davis and his quartet have made an excellent album that is creative and soulful, sure to delight fans of the hard bop tradition.

Milestones; My Foolish Heart; Surrey With the Fringe on Top, Alone Together; The Day You Said Goodbye; United; We'll Be Together Again; UMMG; Shortcake.