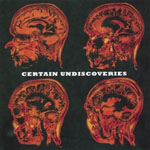 While Taylor's Universe has always been a forum for Taylor's writing (as opposed to the more improvisation- based parallel group, Taylor's Free Universe), Vogel is given ample solo space, making it clear that he continues to evolve since his beginnings as a 1960s avant-garde pioneer and founding member of the 1970s progressive rock group Secret Oyster.

Certain Undiscoveries makes use of irregular meters more than Oyster's Apprentice, but Taylor's near-anthemic melodism remains a defining characteristic. Like a more idiosyncratic Mike Oldfield, Taylor is interested in layering textures on tunes ranging from the insistently rocking "Mandrake to the Spanish-tinged "Nilfish, funky "Majestætn, Ministeren og Forsvarschefen and largely Brian Eno-esque "Variations on a Theme by D.S.

But such blanket categorization of Taylor's music misses the mark in characterizing his often episodic approach. "Mandrake shifts feel no less than three times in the first of its five minutes, moving between half and straight time within the first two. "Majestætn, Ministeren og Forsvarschefen makes its way through a visceral opening groove only to dissolve into a gentler symphonic mid-section that ultimately yields to a solo from Vogel that demonstrates he's still got chops to burn.

Taylor's mix of analog and digital technology gives his music a retro feel while remaining thoroughly contemporary. He's also an expert editor, making the foundation beneath Vogel's frenzied solo on "Ministry of Light choppy and nearly impossible to pin down. Nor is there a lack of sonic weight. Taylor's tone of choice on guitar is overdriven, giving riff-based passages on songs like "Mandrake and "Kelds Far considerable density.

But it's Certain Undiscoveries' closer, the nine-minute "A Beautiful Garden with a Lot of Depressed Animals including Noise Sculpture, that's the album's most adventurous track. A majestic and cinematic opening quickly shifts into an organ-driven passage reminiscent of minimalist composer Terry Riley's early organ works. Like Riley, there's a slow but inevitable development as the staggered keyboard is absorbed by chordal washes that serve as foundation and set-up for a processed saxophone solo. The gentle ambience suddenly turns dense and chaotic, featuring Grosell's tumultuous drumming and harsh synthesizers before returning to chordal washes for an abrupt finish.