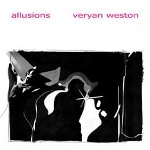 With the first batch of 2009 releases—this is the first—Emanem has abandoned jewel case packaging and opted for the far more appealing all-card version, a very welcome change indeed. For years, pianist Veryan Weston has been a stalwart of the label, in a variety of contexts including duos, trios and quartets---most recently with the fine quartet Caetitu (2008).

Allusions is only Weston's second solo album for the label, the first being Tesselations for Lutheal Piano (2003). That album was an intriguing systematic investigation into a sequence of 52 closely linked pentatonic scales, and the CD included a ROM part that gave information about research that explored the scales used and how they are closely connected. The scholarly air of the album was enhanced further because the music was played on the only surviving Lutheal piano, which is housed in the Museum of Musical Instruments, Brussels. Allusions is in complete contrast to the approach of Tesselations for Lutheal Piano, although it was recorded in Bordeaux following a 2002 lecture by Weston about the concept and process of Tesselations and a performance of it.

Allusions was played on a Bosendorfer grand piano and was freely improvised, not based on predetermined frameworks. As a solo album, it is closer in approach to Weston's Playing Alone (Acta, 1996), having a similarly freewheeling creativity . However, the most intriguing aspect of Allusions, and one that makes it distinctive, is hinted at in its title; throughout, Weston makes occasional passing references to well-known tunes or the work of other pianists. This gives the pieces a flavor that is more akin to jazz soloing than to free improvisation, although that boundary becomes rather blurry here. Crucially, those passing references are mainly fleeting, leaving the listener with a disquieting sense of deja vu. In his titling and sleeve notes Martin Davidson attempts to help out by dropping clues about the references. Fans of cryptic crosswords should read on... "Thus on Getting Somewhere there are at least five well-known tunes that appear and reappear from time to time in various sequences, resulting in the intermingling of a French girlfriend, a savory snack, a noble American aborigine, a steam engine and a yearned-for utopia that reaches a final climax sounding more like Conlon Nancarrow than Harold Arlen". The last of those five is the easiest to spot (especially given the track's title) and it does indeed signal a climax.

Tellingly, in the sleeve notes to Playing Alone (Acta, 1993), Weston commented, "Structures are the foundations from which I work. Building these spontaneously enables me to express a variety of emotions which are a central reason for me to play." His playing here demonstrates that to be as true as ever. Whether referencing others' tunes or building his own, he creates structures that have an irresistible logic without dominating the music, and which do enable him to express a variety of emotions.

Thirty years after his first recording, Veryan Weston is as fresh and inventive as ever; he goes from strength to strength.

Prelude to a Prelude; Into a Mood; Out of the Mood; Hints of Habits; Getting Somewhere; Traces of Nuts; Prelude and Fug.