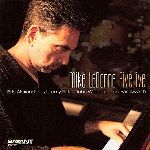 How suitable that FiveLive should have been recorded at the New York City nightspot Smoke, as pianist Mike LeDonne's fiery quintet smokes from fore and aft and port to starboard throughout this pleasurable concert date. Of course, it's hard not to burn with trumpeter Jeremy Pelt and tenor saxophonist Eric Alexander manning the front line while long-term teammates bassist John Webber and drummer Joe Farnsworth provide the rhythmic power that drives the engine.

LeDonne, as splendid a composer as he is a soloist and accompanist, wrote three of the album's eight selections to complement Stevie Wonder's "You and I," Dizzy Gillespie's "Manteca," Cedar Walton's "Bleeker Street Theme," Duke Ellington's "I Got It Bad (And That Ain't Good)" and Pelt's "Good Times." Ellington's plaintive ballad, on which LeDonne's graceful pianisms are rendered in a trio setting, marks one of two departures (the other is "You and I") from the group's buoyant, take-no-prisoners approach, which often calls to mind Art Blakey's peerless Jazz Messengers.

While LeDonne and Alexander confirm and reinforce one's assumptions, Pelt is the group's explicit eye-opener. Not only is his breezy "Good Times" one of the session's highlights, but he continues to mature as an improviser, readily holding his own with two unequivocal masters in LeDonne and Alexander. One assumes the other charts are LeDonne's, and felicitous touches abound, as on "Manteca," taken at a more leisurely pace than usual before ramping up to warp speed to accommodate blistering solos by Alexander and Pelt. On "You and I," the beauty of Wonder's melody is underscored by the ensemble and LeDonne's tasteful solo.

FiveLive presents a sharp and seasoned quintet in full cry with an enthusiastic (but well-behaved) audience hanging on its every note. As LeDonne writes, "This is the kind of record I've always wanted to make." It's also the kind that perceptive fans of contemporary jazz should want to hear.

Encounter; You and I; Hands; Good Times; Manteca; I Got It Bad (And That Ain't Good); Little M; Bleeker Street Theme.