By Eyal Hareuveni
November 20, 2013
Sign in to view read count 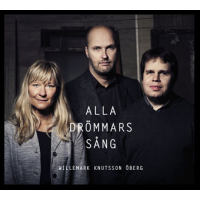 Alla Drömmars Sång (Song of Dreams) is the debut of three resourceful and versatile Swedish master musicians who bridge the Swedish rich folk music with jazz and world music sensibilities. All three musicians worked with Swedish mufti-instrumentalist and world music pioneer Ale Möller, who wrote the liner notes for this album. Vocalist Lena Willmark led with him on the Nordan Project (Nordan, Agram ECM, 1994 and 1996) and Frifot. Trio.; Saxophonist Jonas Knutsson played on the Nordan projects albums and keyboards player Mats Öberg played with the Ale Möller Band.

The three musicians also took part in varied other projects. Willemark recorded her own jazz album Windgour (Amigo, 2000) with pianist Bobo Stenson and bassist Palle Danielsson and also collaborated with bassist Anders Jormin on his In winds, In Light (ECM, 2003). Knuttson, a leader in his own right with his quartet or the Norrland project with guitarist Johan Norberg, have collaborated with Öberg as a duo. Öberg leads his own jazz trio and is also half of the duo Mats/Morgan Band. His endless list of collaborations also includes Frank Zappa.

This trio formed an immediate and intimate connection on a one day recording of this album. In an unhurried and emphatic manner the trio creates powerful and untimely music, full of surprises. Willemark is a master storyteller, as a vocalist and a violinist. Her expressive and warm singing and evocative violin playing color mysterious images of Northern winds and dreamy scenery on "Norrskensbrand ," answered with jazz abstractions of Öberg and Knutsson that sound organic in this context. The trio improvises beautifully on "Stugan" and "Limberg," the latter inspired by a folk saying in Willemark's native Älvdalen dialect that claims that women songs can save the world from great rains. "Laungga Tidh" is based on a traditional polska transformed into a mini-suite, with a lyrical solos of Öberg on the piano and Knutsson on the soprano sax, contrasted with the dramatic and suggestive singing of Willmark.

The trio cover of John Lennon-Paul McCartney "All My Loving" is simply a masterpiece. Willemarks singing sounds innocent and believing in the power of love, but her delivery suggests that she is aware of its fragility. Knutsson and Öberg solo's charge this highly emotional love story with a reserved drama. "Kambhoji" travels organically between Nordic folk themes to fiery jazz improvisation with light elements of classic Indian music. The traditional "Jag Unnar Dig" is a touching farewell prayer to a loved one, sung and played with impressive restrain, suggesting that the this farewell is also a moment of acknowledgement of a great love. The trio concludes with an uplifting and powerful remake of a traditional song from Greenland "Ja-Ia."

A most beautiful and inspired gem.