Slivovitz: All You Can Eat 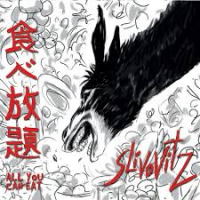 Freely grabbing inspiration from all manner of styles, the Neapolitan band Slivovitz functions as a high- efficiency musical omnivore, digesting and reworking different aspects of seemingly disparate raw materials into a seamless, organic whole. All You Can Eat, an appropriate title for the band's fourth long player (and their third for MoonJune), doesn't appear to be the product of mindless gluttony. Quite the contrary, the music on this disc sounds more like the product of a slow, thoughtful distillation.

Italy has long been a hotbed of hybrid musical forms. During the early 1970s, bands such as Area, Canzoniere del Lazio (with saxophonist Maurizio Giammarco) and Aktuala (an early landing spot for Trilok Gurtu), juxtaposed jazz, classical, rock, avant-garde, and the folk music of the Mediterranean region to create music of stunning originality and lasting value. Slivovitz is cut from the same cloth. Completely eschewing paint-by-numbers fusion cliché and overbearing technical displays, the music on All You Can Eat is characterized by strong, nearly indelible, melodies, satisfying grooves, and improvisations that rely equally on soulful expression and instrumental virtuosity. Slivovitz' sound is also quite unique, as the formidable 5-man front line consists of electric guitar, violin, saxophone, trumpet, and harmonica. He man behind the mouth harp, Derek Di Perri, doesn't stay in one bag for too long. His solo on "Passannante" is in a sparkling, highly technical style—similar to Gregoire Maret—whereas his solo "Currywurst" is surprisingly gritty and blues-inflected.

The tunes, composed by guitarist Marcello Giannini (also a permanent member of Enrico Rava's new electric band), saxophonist Pietro Santangelo and trumpeter Ciro Riccardi are complex, multi-sectioned and somewhat unpredictable. Though largely based in a funky jazz-rock style, "Mani in Faccia" ("Hands in the Face") and "Currywurst" take all manner of compositional twists and turns. "Oblio" starts out as a haunting, somewhat rustic, ballad before exploding into frenzied King Crimson-style riffage. "Persian Nights" and "Hangover" are pretty similar to one another. Brooding, resolutely minor key, and dominated by romping 6/8 rhythms, these pieces sound like something off of the Tzadik label. The most heavily-composed pieces, "Yahtzee" "Oblio" and "Barotrauma," still leave plenty of space for improvisation. Yet, each are extremely well-integrated and come across as complete musical statements rather than a series of difficult riffs played in rapid succession.

It's worth pointing out that the subtitle to "Barotrauma," "La Zappa su piedi," doesn't refer to the late, great composer / guitarist. Rather, the phrase is an Italian colloquialism that means—roughly—to shoot oneself in the foot. Immensely appealing and full of musical surprises, All You Can Eat, does everything but.