Susana Santos Silva: All the Rivers – Live at Panteão Nacional

BY KARL ACKERMANN
February 8, 2018
Sign in to view read count 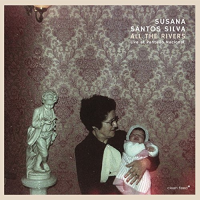 The young Portuguese trumpeter Susana Santos Silva has been steadily rising in the ranks of cutting-edge improvisers and composers. Santos has extensive conservatory training from her native country, as well as in Germany and Holland. She is at home in the colloquial language of traditional jazz and the avant-garde, but her strength is in a sound that is more idiosyncratic and undefinable. Santos plays across a broad scope of formations from The European Movement Jazz Orchestra down to a number of outstanding duo outings; Almost Tomorrow (2013) and If Nothing Else (2015), with Swedish bassist Torbjorn Zetterberg and This Love (2016) with Slovenian pianist Kaja Draksler, all on the Clean Feed label. All the Rivers—Live at Panteão Nacional is Santos' first solo album and it is superb.

All the Rivers consists of a single continuous title track; Santos playing not only the trumpet but the physical structure of the venue as well. The improvised piece was recorded at the National Pantheon / Santa Engrácia's Church in Lisbon and the echo and natural acoustic properties of the church become a proxy for something comparable to electronic augmentation. But it is Santos alone who directs the sound into the nooks and crannies of Santa Engrácia, modulates and changes the harmonics and toys with the dynamics and timbre of the trumpet creating a full-bodied musical experience.

The movement and concentration of All the Rivers neither builds nor feels episodic. The shifts from long, pleasing lines to more aggressive growling are interwoven with lavish patterns and a graceful fluidity throughout. The piece may be experimental but its assembly is resourceful and easy to appreciate. There have been a number of intriguing trumpet solo albums in recent years, from progressive players such as Peter Evans and Nate Wooley but it is a difficult undertaking, especially when completely improvised. Santos' All the Rivers is, for her, something of a return to her more innovative side. It's a beautiful album that should please fans of the avant-garde and open the ears of the more traditional listener.