Westchester Jazz Orchestra: All In 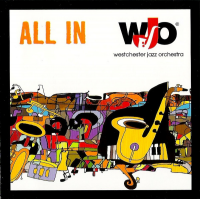 This is the first release from an organization that is now in its fifth year. The Westchester Jazz Orchestra (WJO) is a collective ensemble that consists of well-known jazzmen that live, work or play in this northern suburb of New York City. Many of these members have a significant number of their own albums, and represent working experience with some of the best of today's contemporary jazz big bands.

What is perhaps best about the album is that it consists entirely of jazz standards, save for the closing George Harrison tune, "Here Comes The Sun. Pianist/composer Mike Holober, himself a veteran of several recordings, is the artistic director. The album is best for showcasing several outstanding jazz tunes, and features smartly played solos by its members. Songs like Wayne Shorter's "Ping Pong" are buoyed by solos from trombonist Larry Farrell, tenor saxophonist Mike Migliore and trumpeter Jim Rotondi. Joe Henderson's booting opener, "Caribbean Fire Dance," is ably assisted by tenor saxophonist Jason Rigby, and Horace Silver is represented by two of his classic compositions. On "Peace," Marvin Stamm is noteworthy for his trumpet work on the soaring melody and then, after the ensemble pauses, an outstanding solo, while on "Room 608," Rotondi, Farrell and Migliore repeat themselves in their solo appearances.

As an answer to the Swing Era standard, "In the Mood," the Orchestra responds with a sardonic "(No Longer)In the Mood," composed by Joseph Garland. Baritone sax man Ed Xiques is featured with a burly solo. The Bill Evans favorite, "Turn Out the Stars," is notable for a fine Mike Patterson arrangement and the solo work of pianist Ted Rosenthal.

This is an outstanding presentation of already notable tunes by a terrific ensemble.