Rob Parton's JAZZTECH Big Band: Just One of Those Things

By Edward Blanco
December 30, 2007
Sign in to view read count 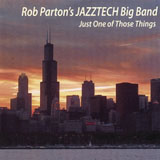 Just One of Those Things is, after only one captivating listen, anything but just another "one of those big bands. The seventh album by trumpeter Rob Parton's Chicago-based orchestra and, perhaps, the best one yet, this is truly a gem of an album that sparkles with every track. Quite a statement to swallow if one is familiar with the discography of the JAZZTECH Big Band and, in particular, with their last blue ribbon release, Two Different Days (Seabreeze, 2004), which, frankly, it's hard to believe could be eclipsed.

Yet Parton himself believes that this is the band's best work, writing in the liner notes that "The music on this CD represents what I believe to be some of the finest playing we have recorded to date. Called "One of the best big bands in the country by The Chicago Tribune, the JAZZTECH Big Band has been providing cutting-edge big band jazz for two decades, performing a monthly gig at FitzGerald's nightclub in Berwyn, Illinois, a suburb of Chicago.

The other two Garling tunes where written as part of The Commission Project (TCP), a non-profit group which fosters music education in public schools throughout the country. The tunes include the explosive opener, "Lickety Split, highlighting a scorching sax solo from Colby that sets the tone for the session. Garling plays lead on the other lively score, "Heads Up. Parton takes over on Wayne Shorter's "Infant Eyes, playing an emotional flugelhorn and finishing off on trumpet. The leader shines brightly once again on the Frank Mantooth arrangement of "You've Changed, delivering two beautiful ballads showing a quieter side of the band's performance.

The band provides a powerful statement on the brassy "Black Nile, the other Shorter composition, where Colby and drummer Rummage one again make their presence known. Parton steps aside and gives way to fellow trumpeter Terry Connell on the Tom Matta arrangement of Clifford Brown's signature chart, "Joy Spring.

While Stille provides his usual dynamic performance on the five tracks on which he appears, it is fellow pianist JoAnn Daugherty who takes over for the balance of the set and makes an impression on "I'll Close My Eyes, displaying her talents with a dicey piano solo on the last warm ballad of the album.

It's important to re-emphasize that Just One of Those Things is not just another big band recording that one will put on the shelf after one or two listens. The shear energy, excitement and finessed power playing, produced by Rob Parton's world-class JAZZTECH Big Band, guarantees hours of pleasurable listening time to those who love and appreciate the magic of the big band sound.

Lickety Split; Prelude To A Kiss; Heads Up; Infant Eyes; Black Nile; Joy Spring; You've Changed; It Might As Well Be Spring; I'll Close My Eyes; Just One of Those Things; It Never Entered My Mind; Knee Deep In Rio.