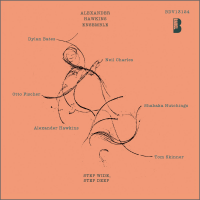 You don't need to spend long in the company of pianist Alexander Hawkins to realize that his encyclopedic knowledge of jazz encompasses everything from Duke Ellington to the avant-garde. That's as true of recordings as it is in person, and amply demonstrated on Step Wide, Step Deep, where the moods range from lazy Sunday afternoon to bristling polyphony. Even though the line up has changed since the excellent All There Ever Out (Babel Label, 2012), the combination of fierce musical intelligence and unfettered creativity remains the same.

Hawkins has assembled a unit that's comfortable across multiple genres. Guitarist Otto Fischer represents the only holdover from the old outfit. Of the new members, reedman Shabaka Hutchings like the pianist, shows himself adept at free improv, but also at home in groove orientated structures, also evidenced by his Sons Of Kemet group. Violinist Dylan Bates illustrates similarly versatility, while drummer Tom Skinner and bassist Neil Charles affirm their rhythmic credentials, as both feature alongside Hawkins in the band of Ethiopian vibraphonist Mulatu Astatke.

Dip in at any point and it can feel like an open improvisation. Listen for a while longer and the organization becomes apparent, though the exact mechanism may never become clear. It's that ability to retain freshness and unpredictability within a compositional framework which distinguishes Hawkins from so many others. Add to that the instrumental virtuosity of both him and his bandmates and inspiration drawn from across the entire spectrum of jazz history but transmuted into thoroughly contemporary form, and you have something exceptional.

On the title cut (named after a Henry Threadgill quote), the initial swing veers increasingly choppy via a spirited bass clarinet solo, before eventually morphing into a drifting ballad with loping bass and waves of guitar surf, which in turn develops into a swirling ensemble vortex. Fischer's "Forgiven Only Words Once" contrasts by being as spare as the opener is dense, a feeling as much as anything punctuated by glints of darting piano, wiry violin and percussive outbursts.

Highlights comes thick and fast as the enigmatic and knotty "MO (-Ittoqqortoormiit)" showcases a surging and energetic piano outing from the leader, while the mysteriously atmospheric "Listen/Glow" contains a scratchy and caffeinated duet for arco bass and Hutchings bass clarinet, and the louche bluesy lilt of "Advice" frames a display of husky singing insistence from Bates' violin. The two-minute plus silence without explanation before the dreamily subversive "Boabab Constellation" seems an unnecessary gimmick on a disc already jam-packed with invention.