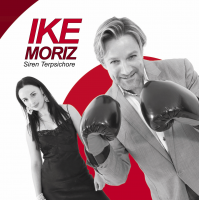 In the past five years No.1 international singer, producer, composer and actor Ike Moriz has been on an incredible journey delving deeply into the world’s vast songbook of Jazz, Latin & Swing standards: He recorded & published a total of eight albums of this genre, was voted one of the top five vocalists in South Africa, filmed several music videos, toured South Africa & Northern Europe playing over 350 concerts, and became one of the most sought after SA entertainers for both local & international events. Recently Ike also got married to Madri, sister to well-known SA stage and TV personality Nataniël (www.nataniel.co.za). In 2013 Ike Moriz re-appears on the international Jazz & music scene with “Siren Terpsichore”, his 13th studio album to date, which has already been described as the “Crown jewel of original SA swing” (CD Baby). Composed, produced & recorded by Ike himself, it contains 14 beautifully crafted, brand-new songs in the Jazz/Swing/Latin genre - including the popular UK ‘Abbey Road Mix’ of his recent composition “Angie Blue” as well as two recordings in Spanish language, sung in his favorite Argentinean-Spanish accent. Siren Terpsichore was recorded at Paris Studios in Cape Town with a band of top session musicians from all over the world (SA, Mozambique, Argentina, Germany, Scotland). The album is both upbeat and uplifting with his usual fresh, jovial, tongue-in-cheek Swing/Jazz sentiment. If Frank Sinatra had been a songwriter and if he was still alive, he’d surely be writing songs such as these: with strong vocals, timeless melodies and powerful, archetypal lyrics straight from the heart!

All About Jazz musician pages are maintained by musicians, publicists and trusted members like you. Interested? Tell us why you would like to improve the Siren Terpsichore musician page.