Home » Musicians » Discography » Nobody Does It Better

Nobody Does It Better 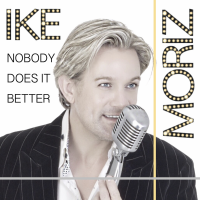 Ike's 2nd release in 2014 is available worldwide from 29.11.14 (iTunes, Amazon etc.) just in time for the festive season. ). This 16-track-CD is entitled 'Nobody Does It Better' and mainly contains Moriz's modern versions of popular classic songs from the early 1930s to late 1940s. Look out for gripping piano & voice arrangements of 'Smoke gets In Your Eyes' (Kern/Harbach) and 'My Funny Valentine' (Rodgers/Hart), two duets with the award-winning South African Jazz vocalist Monique Hellenberg (Goldfish): the title track 'Nobody Does It Better' (Hamlisch/Sager) and 'Skylark' (Mercer/Carmichael) as well as a retro-swing recording of 'Louisiana Fairytale' (Coots, Gillesoie, Parish). Moriz also takes on Michael Buble's popular hit 'Home' as well as Cole Porters timeless compositions 'I've Got You Under My Skin' and 'C'est Magnifique' rounding the album off beautifully with a smokey rendition of Burt Bacharach's 'What the World Needs Now Is Love Sweet Love'.

Help improve the Nobody Does It Better page

All About Jazz musician pages are maintained by musicians, publicists and trusted members like you. Interested? Tell us why you would like to improve the Nobody Does It Better musician page.