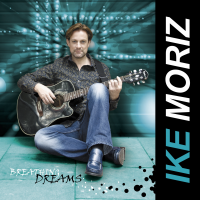 Atlantis; Breathing Dreams; Apollo; Still; (The Journey Of The) White Baboons; Whatever; Not About You; Heaven; Another Me And You; Hold My Breath; Demian; In Every Place; Right Then; Peace Dream (Uphupa Ngoxolo) [Feat. Brothers With Voices]; You Could [2011]; I Believe It Can Be Done

Since his last original Rock album release hit in 2007/2008 (All Around The World) Moriz has recorded & published eight Swing/Jazz albums, he was voted one of the top 5 vocalists in South Africa, he filmed several music videos, and he toured South Africa & Northern Europe playing over 300 concerts. During this incredible 4 year-journey Ike composed, produced & recorded 16 beautifully crafted, unique, brand-new Rock/Pop songs (incl. 3 cover songs by The Talking Heads, Iggy Pop & Jeff Barry). In the process Ike reunited with his incredibly versatile band of top South African session musicians at the infamous Paris studios in Cape Town. This powerful collection of poetic musical gemstones reflects the spiritual awakening & life journey of a highly aware, experienced, multi-faceted artist of the 21st century at the top of his game. Moriz is breathing life into his dreams & ideas through his songs starting our journey of exploring this album with the epic, mythical opening song ‘Atlantis’ which offers a glimpse into Moriz’s optimistic & realistic view of the human condition through the ages. It is followed by the upbeat, warm & feel-good title track ‘Breathing Dreams’ and the folky pop ballad ‘Apollo’ inspired by the ancient divine archetype. The next song is a classic carpe diem pop/rock anthem called ‘Still’ which is an energetic re-recording of his highly acclaimed hit song which first appeared on his debut album ‘Mirrors and Shade’ in 2003 (voted song of the month by Rock legend David Bowie). Moriz then changes the setting with the spiritual Bob Marley-esque reggae tale of ‘(The journey of the) White Baboons’ which comes as a pleasant surprise & also ends with one (listen out for it!). Our journey continues through Ike’s tongue-in-cheek version of Iggy Pop’s lesser known Punk Rock escapade ‘Whatever’ which acts as a spicy palate cleanser enabling us to fully absorb & appreciate the radio-friendly, catchy & infectious love song ‘Not About You’ followed by Moriz’s shiny & minimalist version of The Talking Heads’ classic ‘Heaven’. ‘Another Me & You’ is probably the darkest, heaviest & most grungy song of the album beautifully showing the dark side of falling in love. It leads smoothly into the angry & powerful rock song ‘Hold My Breath’ which ironically contains the longest held note of the album and with a length of just over 21 seconds (on the word ‘breath-ohuhoh’) one second longer than the believed longest held note in a song in UK chart history by Harket in ‘A-ha’s 2000 song ‘Summer Moved On’. The soft & dramatic alternative indie pop ballad ‘Demian’ inspired by Hermann Hesse’s famous book of the same title leads us into the light-hearted Beatles-like love song ‘In Every Place’ before Moriz changes the pace with the eerie disillusioned vision of ‘Right Then’. ‘Peace Dream’ is a collaboration with the South African vocals ensemble ‘Brothers With Voices’ from the Hout Bay township who Ike has been mentoring & sponsoring since 2007. It contains both English and ‘Xhosa’ lyrics. The album ends with a very bare and raw version of Jeff Barry’s ‘I Believe It Can Be Done’ which has never before been released on CD as it only appeared as a song sung by actor Ray Sharkey in a long forgotten 80’s movie called ‘The Idol maker’. Last but not least, song number 16, a bonus track, is a re-recording of Ike’s debut album song ‘You Could’: A very catchy and enigmatic rock/pop love ballad.

All About Jazz musician pages are maintained by musicians, publicists and trusted members like you. Interested? Tell us why you would like to improve the Breathing Dreams musician page.