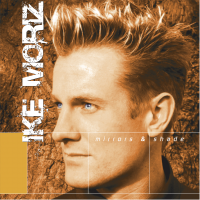 MIRRORS AND SHADE - Indie Rock album (Release date: 01.04.2004) (Catalogue #MOS0003) His songs have already been played on the radio and TV in 17 countries world-wide. They were voted “Song of the Week” at davidbowie.com twice (Still / You Could). Now they have found their place on his UK debut album: IKE MORIZ - MIRRORS AND SHADE. The 11 track album was recorded over the past few months in London with the highly acclaimed band, that has played the London circuit with Ike in the past; including long-time MORIZ musicians guitarist Jim Barnes, drummer Alan van Kleef and vocalist Rike Duser.The spirited and addictive title song Mirrors and Shade (UK No1, NL No.2),like concentrated 'Moriz elixir' filled with urgency and passion, leaves onewanting more. Right from track one, it is apparent, that this is highly original & skilful self-expression and not another hollow & senseless attempt to gain fame & fortune a la 'Pop Idol'. We uncover a great diversity of musical face: from the atmospheric and enigmatic Still, the intense Another Day and the accoustic, dark and theatrical Flame Blue to the heavy and grave indie anthem Visionary and the romantic Britpop tribute Drowning (in London Town). Of course, we also find the radio hits Fall into the sun (SA no1) and "You could (thrill me, kiss me, kill me,...)" (NL no5)! Based in London since 1999, Ike is of South African / German descent. His new style has emerged from his diverse musical experiences, fronting bands in London, Cape Town, Rotterdam and Hamburg.

All About Jazz musician pages are maintained by musicians, publicists and trusted members like you. Interested? Tell us why you would like to improve the Mirrors and Shade musician page.