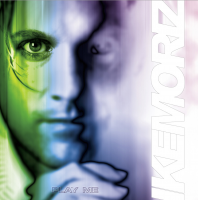 Hey, Hey-Hey, Hey; Play Me; I Feel Real; Every Time The Sun; Light Is Dark; Evacuate Me; Dull Blue Eyes; The Sad Songs

This 8 track rock album was recorded in London right after Ike Moriz`s return from the ‘Mirrors and Shade tour’ in April 2005. This is Ike’s second independent studio album on his label Mosquito Records London and like on his previous UK releases, all songs were written, produced and released by the artist himself. PLAY ME is packed with a new drive and energy that springs from Ike’s exposure to many different countries, life on the road and, most importantly, moving back to South Africa after years in London. Songs like the rhythmic and dramatic ‘I feel Real’ and the heavy yet laid back ‘Light is Dark’ and ‘Evacuate Me’ reflects the artist’s intense need for change. The fiery opening song ‘Hey, hey-hey, hey’ pulls the listener right into the world of Ike Moriz. It is followed by the extremely hooky title track ‘Play Me’. Bearing in mind that all songs are also released digitally (itunes etc.), Ike has chosen to treat most of the tracks as if they were Single releases: they are equally strong, impressive and emotive. However, the title track will be the first single to hit the shelves in South Africa in October/November this year. An exciting video of this track was shot in Cape Town this month involving top SA director Johan Nel of ‘Fokofpolisiekar’ fame and SA top model Lisa-Marie Schneider. Expect no less than excellent, unique, brand new proudly South African music with a very international sound. Ike Moriz has gained international acclaim since starting to work as a solo artist with George Michael’s and Marc Almond’s producer S. Kent in London in 2002/2003. However, he has been writing and producing his own material for much longer than that, starting in 1995 shortly before studying music in SA, Germany and Holland. He has been described as “Bowie without the glam meets Oasis without the self-importance teamed with UK chart “alternative” without the boredom.” His songs have been aired on the radio + TV in 17 countries, and he has just finished the “Mirrors and Shade tour 2004/05” promoting his debut album in the UK, Holland, Germany and South Africa. The previous singles have reached high radio chart positions in the UK, Holland and SA, and he has gained more and more support from an international fan base over the past 3 years. Ike has also enjoyed working on movie sets, doing small parts in international movies eg. Look out for him as a barman in ‘Alfie’, a pianist in ‘Bridget Jones 2’ and a reporter and friend of the bride in ‘Love actually’. Ike Moriz has returned to the road, bringing "PLAY ME TOUR" to an audience in South Africa. By using the words "PLAY ME" for both his new album, single and tour, Ike is taking a cynical look at the egotistical, money & fame driven pop culture of this century. You can keep up to date at www.ikemoriz.com

Help improve the Play Me page

All About Jazz musician pages are maintained by musicians, publicists and trusted members like you. Interested? Tell us why you would like to improve the Play Me musician page.