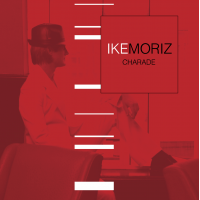 Charade; Amapola; I Just Called To Say I Love You; Dance, Ballerina, Dance; Sway; So Nice (Samba De Verão); Our Day Will Come; Close Your Eyes; Let's Face The Music And Dance; It Might As Well Be Spring; Close To You; How Insensitive; Taking A Chance On Love; I Have Dreamed; Quiet Nights Of Quiet Stars

This collection of classic torch songs, standards & crooners in beautiful latin arrangements topped with the smooth and sexy vocals of Ike Moriz is inspired by the 1963 movie 'Charade' with Audrey Hepburn and Cary Grant. The infamous title song was written by the songwriting genius that is Henri Mancini. Ike’s 9th studio album to date contains 15 tracks made for easy listening ranging from Nat King Cole's hits 'Dance Ballerina Dance', 'Let's Face the Music and Dance' and Dean Martin's 'Sway' to Stevie Wonder's 'I Just Called to Say I Love You'. You will be amazed by the lovely sound & samba,mambo, bossanova & salsa arrangements of these musical gems. Further tracks among others include the Spanish version of 'Amapola', the gentle & triste 'How Insensitive' (Insensatez), The Carpenter's hits 'Close To You' & 'Our Day Will Come' as well as Jobim's light & shiny 'So Nice' (Samba De Verao). Like on his previous Jazz/Swing albums Ike has once again recorded with multitalented SA navy big band leader Willie van Zyl (saxophones, clarinet) and UK pianist A.McPike. An album not to be missed!

All About Jazz musician pages are maintained by musicians, publicists and trusted members like you. Interested? Tell us why you would like to improve the Charade musician page.