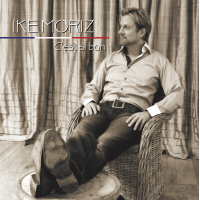 C'est Si Bon; Night And Day; La Mer (Beyond The Sea); The Lady Is A Tramp; Les Feuilles Mortes (Autumn Leaves); Fly Me To The Moon; Hymn A L'Amour; When Joanna Loved Me; Orange Colored Sky; When I Fall In Love; When You're Smiling; It Had To Be You [2011]; The Days Of Wine And Roses; Dream A Little Dream Of Me; I've Got a Crush On You

Retro Swing & French Swing in modern minimalist arrangements with the smoothest crooning voice of South Africa. Ike Moriz is starting 2011 with a bang! Only 3 short months after the release of his previous album, “South Africa’s Tony Bennett” (Full Circle) is bringing out a brand new 15 track swing album, his 10th studio album to date. It features South African guitarist Morne Van Der Merwe, Navy big band leader Willie Van Zyl on clarinet & saxophone as well as A. McPike on keys & responsible for arrangements. The fresh new CD has a distinctive minimalist feel to it, thriving on Ike’s shining, full-bodied, smooth and diverse vocals. It contains many classic hits from the swing genre, including 4 songs with French lyrics: La Mer, Les Feuilles Mortes, Hymn A L’Amour and the title track C’est Si Bon. A sound feast from the southern most point of Africa worthy of exploration!

All About Jazz musician pages are maintained by musicians, publicists and trusted members like you. Interested? Tell us why you would like to improve the C'est Si Bon musician page.