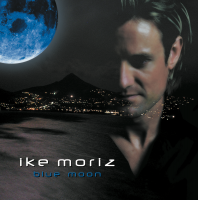 I Can't Believe That You're In Love With Me; Blue Moon; Besame Mucho [lounge Mix]; This Love of Mine; Learning The Blues; Don't Get Around Much Anymore; What A Wonderful World; There Is No Greater Love [2010 Mix]; Isn't It Romantic; Blue Skies; Summertime; Mean To Me; Blue Velvet; Strangers In the Night; Nowhere Man; From Russia With Love

Since returning from touring Europe at the end of 2009 where Ike also shot the music video for STARRY NIGHT (youtube) he has now completed his 8th studio album entitled‘Blue Moon’. It is available on iTunes. The album contains 16 smooth & jazzy crooners/torch songs from well known hits like ‘What a Wonderful World’, ‘Besame Mucho’ and ‘Summertime’ to jazzy adaptions of John Lennon’s ‘Nowhere Man’, Elvis Presley’s ‘Blue Moon’ and Dean Martin’s ‘Mean To Me’. It ends with a bonus track, namely Ike’s version of the famous James Bond movie title hit song ‘From Russia With Love’. Like on his previous Jazz/Swing albums Ike has once again recorded with multitalented SA navy big band leader Willie van Zyl (saxophones, clarinet) and UK pianist A.McPike.

All About Jazz musician pages are maintained by musicians, publicists and trusted members like you. Interested? Tell us why you would like to improve the Blue Moon musician page.