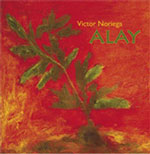 Victor Noriega goes back to his roots on Alay, his second album, to play traditional Filipino songs and originals based on Filipino music. He was awarded a grant from the Jack Straw Artist Support Program to arrange an album of Filipino tunes in 2005, and this is the result.

Filipino music has absorbed European and American influences into indigenous sounds. And while these selections dwell strongly on the former side, Noriega adds jazz harmony to give the music pith and depth. His sense of time is sure and confident, and his vision never strays from a well-defined framework. The Seattle-based pianist works with long-time band members Willie Blair (bass) and Eric Eagle (drums), who help him weave a tantalising web.

Noriega is a lyrical pianist. He picks each note for its melody and extends thematic ideas without straying far from the core. He stretches out on "Pandangguhan, a pirouetting tune that was raised on classical music. He veers away from the upbeat to slow the momentum and inject some exquisite introspective passages. He showcases this side on the elegant movement of "Bayan Ko. His notes are spare and open, and the rhythm section is emphatic, even where Eagle uses the cymbal for accent. In short, a compelling performance that rises to a resounding climax as Noriega emphasises the melody through resounding dynamics.

Noriega contributed the title tune, "Alay, which means "offering. He dices the largely sparse piece into four parts, using an intro and a closing segment. Another original, "Kuya, has more impact. He rides a light groove, the lithe dance flecked by percussion to give it absorbing buoyancy.