Baka Beyond: After the Tempest 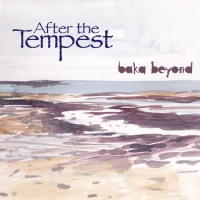 Back in 1992, before the term "world music" was prevalently used, British guitarist Martin Cradick and his wife, vocalist Su Hart, went on an expedition into the Cameroon jungle to learn about the music of the Baka Forest People. This led to an interesting cultural collaboration, and an enduring relationship lasting into the present. In the same year, motivated and inspired by their exploration, Cradick and Hart went on to form the band Baka Beyond, and recorded the successful "Spirit of the Forest," garnering international recognition. After the Tempest is the continuing fascinating fusion of two ethnicities which they aptly entitled Afro-Celtic.

Some of the songs on the record are loosely based around ancient Gaelic folkloric legends, as "Sylkie," about seals which transform into human, and nocturnal fairies in "Seóthin Seó Ló." These and the other Irish influenced pieces are cleverly immersed in Baka polyphony which gives them an exotic intonation. Long before reggae music came into being in Jamaica, the Baka were performing a very similar cadenced beat in their religious ceremonies known as Yelli. This familiar rhythm can be heard in "Heart of the Night," -complete with tribal chanting -it is definitely a highlight track on the record. "Mosumana Collé," and "Imbayé," are energetic numbers featuring two native singers, accented by compacted percussion, the interplay of the guitar and violin is ingenious and unique. Much of the Baka vocalizing style is characterized by yodeling, which was incorporated in "Ariel's Song," where a village troupe of singers were layered in. Baka Beyond is a cross cultural mix of musicians augmented by Baka contributors, brought in for their distinctive talents. The whole production is steeped in a joyous and infectious pulse with an authentic "world music" essence.

Since its inception, Baka Beyond has maintained a vital connection with the Baka Forest People, and initiated the Global Music Exchange, which records the local music, with the royalties going back into the communities. This cultural fair trade is a worthwhile cause that also educates people globally about the dangers which the native tribes encounter due to deforestation and expropriation of their lands, leading to loss of their hunting grounds and ancestral homelands. It has been a phenomenal effort to achieve this and band leader Martin Cradick has been determined in achieving the goal of raising international awareness for this cause. Proceeds from After the Tempest go to this initiative, in direct assistance to the Baka Forest People.