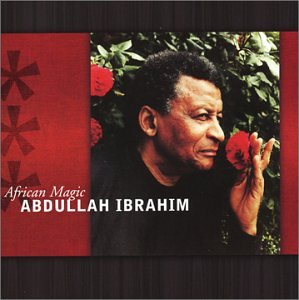 It's very easy to call attention by playing fast or flashy. Pianist Abdullah Ibrahim does not believe in any of that. When he approaches the keyboard, he brings a sense of balance and poise that make the notes he plays sound clear and natural. That's not to say he lacks the ability to cook up drama and energy; he just does so in an understated way that somehow communicates the feeling all that much more effectively.

While Ibrahim's studio recordings tend to display a degree of deliberate care in their construction, his live work best illuminates his remarkable ability to fluidly shift among moods and styles. African Magic documents his 2001 trio performance at Berlin's last Jazz Across The Border Festival, an involved set which passes through many colors and textures before the group even pauses for applause. Turning a kaleidoscopic event like this into tracks on a CD means artifically breaking it up into a series of (rather small) pieces that really work much better in context, so approach this recording with the intent to experience its changes and developments in order.

Much has been said about Ibrahim's South African roots, which run deep in every respect. He played on the first South African jazz record ever made, and he's been incredibly productive ever since. As an expatriate, he has expanded his musical palette to the point where he's equally conversant in Latin jazz as roots blues. As is evident from his playing on African Magic, he views the entire spectrum of improvised music as a continuum. The disc segues from bolero to samba, from lyrical ballad to tight swing, from insistent stride to deep blues, and back. Memorable moments include the simmering "Tuang Guru," which shifts from a lilting minor theme into brief spurts of Monk-like melodic emphasis. Bassist Belden Bullock, a veteran of Oliver Lake and Ibrahim's groups, takes the opportunity to provide punchy accents and off-kilter bounces that serve to reinforce the Sipho Kunene's detailed snare drumming.

The ballad "Eleventh Hour" conveys a sense of melancholy loss, more through suggestion and color than any sort of melodramic flourish. And when the stark syncopated cascades of "Machopi/Jabulani" lead into the warm blues of "Black Lightning," Ibrahim connects the dots in an intuitive manner.

In the end African Magic is a story which deserves to be heard in its entirety. It's a narration of Ibrahim's breadth of experience, his treasured tradition, and the joys of creation in the moment.