By Ian Patterson
November 11, 2021
Sign in to view read count 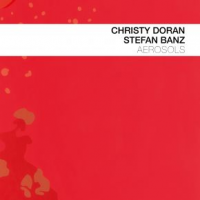 Aerosols is Irish-born, Lucerne-based guitarist Christy Doran's fifth solo album in a career which began in the early '70s, and his first since Acoustic Isles (Creative Works Records, 2006). That CD/DVD was an intermedia collaboration with visual artist Susanne Dubs. In similar vein, Aerosols sees Doran respond musically to five paintings by Swiss multi-media artist Stefan Banz. In turn, vla his own medium, Banz answers to five pieces of music composed by Doran. The paintings—with accompanying text—adorn the CD booklet, inviting contemplation while listening to the music. Doran's multi-faceted compositions, however, are absorbing in and of themselves.

Doran plays acoustically, although his basic palette is augmented throughout by electric guitar, pedal effects and loops. On "Cat Care," where fragmentary motifs, pizzicato melody and strummed riffs flow into one another, Doran loops multiple lines before unleashing a gutsy, blues- edged solo at pace. The blues is never far from Doran's vocabulary, rearing in his solos on the spiky, multi-layered "From The Ballad of Affection" and again on "Alexander," where acoustic and electric guitar dialogue in clean, unencumbered exchanges. If Doran's blues-rock vein stems from Jimi Hendrix—an avowed influence—then he also shares the latter's appetite for genre-bending and technological experimentation.

On "Venice" Doran mines the percussive nooks and crannies of his acoustic guitar's body and strings, producing knocking, scratching, damped strumming and bowing techniques to both rhythmic and atmospheric effect. Short, fluid bursts are met with looped counter runs which overlap like peeling echoes. Drone and gently sculpted electric guitar lines shape "Kaleidoscope in a Blizzard." Outré soundscapes drawing on feedback, spacey, pedal-derived textures, loops and anarchic guitar-grunge bring greater abstraction, in varying degrees, to "White Fields of Diamonds," "Defence of Defeat," "Lactus" and the loosely psychedelic title track, which would have made a terrific alternative theme tune to The Twilight Zone.

Yet for all the dissonance, distortion and sonic manipulation on show there are equal measures of melodic development, rhythmic pulse, lyrical finesse and natural, unadulterated textures from Doran's strings. The gently pastoral "Upgrading Equality" is a case in point, closing the set on a quietly arresting, acoustic note.

Sadly, Stefan Banz died quite suddenly of a heart attack in May 2021, though he lived long enough to hear the completed music. Aerosols stands as a fine testament to Banz' vision and creativity, and also ranks as one of Doran's most compelling musical statements.