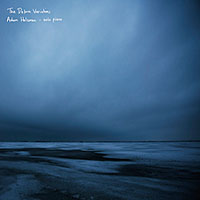 He's been Steven Wilson's keyboardist of choice (and rightfully so) since the British progressive rocker first hit the road in 2011, after years fronting Porcupine Tree, in support of the Kscope artist's first two albums as a solo artist—2009's Insurgentes and 2011's Grace for Drowning. But while Adam Holzman continues to work with Wilson to this day—appearing on two subsequent studio albums, 2013's The Raven That Refused to Sing (And Other Stories and the recently released Hand. Cannot. Erase. (2015), as well as the limited edition live album Catalog | Preserve | Amass (Headphone Dust, 2012), the more widely available full concert document Get All You Deserve (2012) and 2013 EP Drive Home—the 57 year-old keyboardist (who looks considerably younger) is far from new to the scene...or high profile gigs.

Beyond first coming to attention on Miles Davis' Tutu (Warner Bros., 1986) and subsequent touring with the legendary jazz trumpter, Holzman has, in addition to occasional albums with his own bands including Brave New World, recorded and toured with other artists of significance including Wallace Roney (appearing on albums including two of the trumpeter's HighNote releases, 2004's Prototype and 2005's Mystikal), Bob Belden, and Holzman's wife, guitarist Jane Getter. But it's his work with Wilson over the past four years that has likely garnered him the most attention of his career outside the jazz world...and yet, the idea of a progressive rocker like Wilson bringing musicians with jazz and/or classical backgrounds (both applying to Holzman) isn't particularly new; in fact, dig back to the roots of the genre and you'll find that many of its most prominent artists were trained in other disciplines, but wanted to bring those disciplines into a rock context.

That said, at a time when progressive rock has finally begun to lose the "dirty word" status it began to garner in the mid-to-late '70s, there are few artists who can match Wilson in both his reverence for what came before...and his eye on what's to come next. And so, while Hand. Cannot. Erase remains firmly entrenched in the progressive rock world, it also reflects Wilson's broader musical interests, described in a recent All About Jazz interview as "I listen to electronic music; I listen to pop; I listen to classical; I listen to jazz; I listen to Japanese noise music. All these of things get mixed up in my head, mixed up in my musical psyche, and they come out in a way that's not necessarily self-conscious."

It takes special musicians to be able to work with whatever Wilson throws their way, and Holzman has proven, album after album and tour after tour, that there's a reason he continues to be recruited by Wilson. The Deform Variations is but one case in point. A series of 27 miniature solo piano improvisations based on Grace for Drowning's gorgeous ballad "Deform to Form a Star," Holzman's 40-minute album of expansions and extrapolations on that song's theme is further evidence that neither Holzman nor any other member of Wilson's band, for that matter, approach Wilson's music as if it were in a glass box. Every night Wilson's band performs this tune in concert, Holzman is afforded a brief opening solo that clearly demonstrates that no two shows are alike. While it may surprise some jazz purists, The Deform Variations demonstrates the same kind of "drawn from the ether" improvisational élan that would appeal to fans of Keith Jarrett, Chick Corea and Herbie Hancock—if they are open-minded enough to consider an album of piano solos culled from a progressive rock song and tour.

The Deform Variations' stunning virtuosity never gives into it for its own sake but, rather, adheres to the idea of using the first few bars of the studio version—originally performed by Dream Theater's Jordan Rudess—as a jumping off point into complete spontaneity while still revering the song's heart, treating it as a lightning rod around which Holzman's playing hovers, builds...and strikes. There are traces of classicism in his arpeggio-driven "Berlin"; unmistakable excursions into the jazz vernacular with his use of fourths during "Essen" and "Paris"; even the kind of Americana tinges and hints of gospel that Jarrett is wont to regularly throw into his own improvisations on "Montreal" and "Pistoia."

Some pieces begin by reiterating Rudess' opening bars; others start right into Holzman's improvisation. Some pieces begin with the sound of an audience; others fade in; still others fade out. But no matter how Holzman managed to find the right way to use each of these brief miniatures—described by the keyboardist as having "to cover a lot of ground quickly, and there should probably be some fireworks in there somewhere. This format is not exactly conducive to dreamy pianistic meditations, but it does force the player to compress and economize ideas."

And there are plenty of fireworks to be had on The Deform Variations; and yet, despite Holzman's assertion the contrary, he manages to find ways to wax more meditatively, even as he truly does compress and economize. In many cases, there are more ideas pulled together in uncannily cogent fashion than can be found on solo piano recordings where the artist is less intrinsically limited by length.

Given the number of dates on the 2013 The Raven tour (79) from which all of these pieces were culled, the task of selecting which pieces to use and how to edit/organize them into a cogent form must have been a formidable a task. Surprisingly—with the tracks named, in utilitarian fashion, after the cities in which they were recorded—they are largely sequenced alphabetically with the exception of two cities, Berlin and Buenos Aires, are sandwiched between "Philadelphia" and "Pistoia."

Still, amongst the many remarkable qualities of The Deform Variations is how each miniature, ranging from just under a minute to twenty seconds shy of three minutes, manages to somehow stand alone as a distinct entity yet, when taken as a whole, seems to possess an overarching narrative that makes absorbing the album in its entirety the best—the only—way to truly experience The Deform Variations.

A true crossover album that takes the introduction to a song from a progressive rock album and tour and transforms it into an album that easily fits into the jazz world, The Deform Variations is the kind of record that could, for those with open minds, drive progressive rock fans to explore more in that world while at the same time, perhaps, suggesting to jazz fans that there may be more to progressive rock than mellotrons, epic songwriting and mixed meters (not that there's anything wrong with that).

Music is, after all, just music; and while labels have emerged over the centuries to try and pigeonhole it into smaller boxes that make it easier to define and digest, the truth is that, in the 21st century more than any that has come before, music is increasingly about cross-pollination and the dissolving of unnecessary boundaries, be they cultural or stylistic. Holzman has, with the superb The Deform Variations, delivered an album that makes this point with absolute, crystal clarity.